The 1st F1F Formula One 2011 PS3 World Championship will be the inaugural F1F Formula One PS3 World Championship season, which commenced on 3 April and will end on 27 November after 16 rounds and 2 non-championship races. The championship was run to F1F rules. F1 2010 will be the game used for the first 11 races and F1 2011 the game used to the last 4 rounds. All cars will be of equal pace. Both Championship's went down to the final race with John Brookfield leading Ed Greenhalgh by 0.5 points and Oli Peacock by 21. Peacock took pole but retired from the race and it was left between Brookfield and Greenhalgh to fight it out on track in the last 5 laps. After an enthralling battle Greenhalgh crossed the line first, but was demoted to second with time penalties which he duely accepted, handing the title to Brookfield. Brookfield's team, Rosso Bull and the McRenault team of Bradley Downton and Peacock both ended the season on 310 points and 6 wins. As a teams championship an annonymous person not involved in the championship suggested deciding it by using something that included both teammates and suggested combined Drivers Championship finishing positions, with the lowest cumulative positions taking the title, thus handing it to Downton, Peacock and McRenault.

Early in the season the Playstation Network went down and the Korean Grand Prix (held on 24th April) and the German Grand Prix (held on 15th May) both had to be postponed. Racing resumed on 5th June at the British Grand Prix. The season was also marred by mass controversy on 21st August at the Monaco and Singapore Grand Prix's. While holding 1st, 2nd and 3rd respectively, John Brookfield, Ed Greenhalgh and Moussa Awada dissapeared from the timing screens. Each ones screen stated they were the only particpant left but j3z_h, Oli Peacock, Jamie Franklin and Bradley Downton's screens indicated that they were the top 4. This incident, largely discussed was put down to connection issues and thus John, Ed and Moussa lost their top three places. Things kicked off again in Singapore as the three mentioned before also dissapeared in Qualifying. Bradley Downton took the decision to restart, enraging the already furious field as to how ridiculous the situation was. After calls for Countbacks and re-run's Bradley took the decision to kepp the results as they were, and move swiftly on.

Testing Season started once 16 drivers had signed up for the championship. On the first day of testing another driver signed up bringing the current total to 17.

Testing Season began on the 14 March 2011 and lasted for 2 weeks, ending on 28 March 2011, 6 days before the first race. Testing Season took place at the Montreal Circuit in Canada. The plan was that within the 2 weeks all drivers had a chance to post lap times at any point with the quickest drivers at the end being put into the F1 league, then F2 and so on if more drivers sign up. Chris Steer never posted a lap and oORIISEOo never contacted Bradley back.

As seen from the times below there is a clear split in speed. Due to this Bradley decided that everyone down to Asanator would be in F1 whereas the others would be entered into F2.

The Championship was first announced to the members of the Junior championship before also being announced to the members of the Official championship and also others. Car numbers were assigned to drivers as they entered the championship. Only 12 drivers maximum were able to participate in one race. At round 5 in Turkey Bradley Downton attempted to use Computer controlled drivers to fill the empty slots on the grid. This did not work however as they were agressive and thus, all disqualified. From round 11 onwards the Championship will use the F1 2011 game, this enables up to 16 drivers to enter, so free spaces were advertised.

Which drivers went into which championships was decided during Testing Season. After testing season and once sorted into championships drivers will also pick their own cars and also a teammate for the all new Teams Championship. However, after the postponement of the Korean and German Grand Prixs the second division fell apart due to lack of drivers and was thus ended. 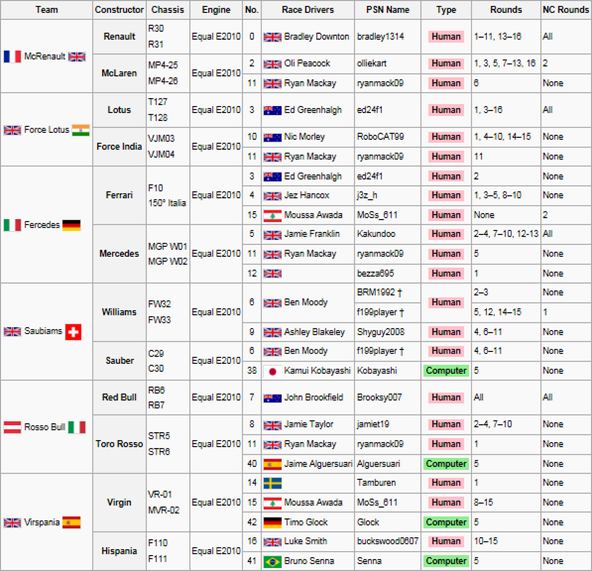 † BRM1992 experienced the 'Yellow Light of Death' during qualifying for the German Grand Prix. Upon purchasing a new PS3 console his name changed to f199player.

For this Championship a it was decided a Teams Title would also be fought over. This prompted each drive to pick a teammate and create a team.

This team was set up by Nic Morley after he declared he had signed for Force India and also wished to be part of an all Australian line-up. With a strong team and teammate Ed Greenhalgh, winner of the 1st Official F1Fanatic PS3 Junior Championship, was only too happy to drive the Lotus. Neither Force Lotus car arrived at the British Grand Prix, so Ed Greenhalgh drove the Ferrari Fercedes instead. Nic Morley also missed the German Grand Prix as well as both Non-Championship races and after the Belgian Grand Prix announced he was withdrawing from the championship. Morley however announced his return for the tribute races but failed to make the final race in Abu Dhabi. Ryan Mackay drove the Force India in the Canadian GP.

A last minute creation put together by j3z_h and Jamie Franklin. With the F10 and MGP-W01 chassis' this promises to be a great threat. For the second round in Britain Ed Greenhalgh took the Ferrari seat after j3z_h didn't arrive. Kakundoo missed the opening round in Australia however and also failed to make the Turkish Grand Prix in which Ryan Mackay took his seat. j3z_h and Jamie Franklin also both missed the Korean Grand Prix. Jez Hancox missed Bahrain and Non-Championship Monaco Grand Prix's as well but returned for Monaco. After Belgium, Jez failed to make another race. Jamie Franklin missed Canada, as well as the tribute races and the final in Abu Dhabi. Moussa Awada drove the Ferrari in the Non-Championship Monaco GP.

A team created out of Ben Moody and Ashley Blakeley. It was agreed that Ben Moody could have the Williams but in every race that Ashley enters Ben would have the Sauber. The tam had no entries for the first race in Australia. Since then however Ben Moody has driven the Williams in the British, German and Turkish Grand Prix's while Ashley took it for the Valencian and Korean races with Ben Moody moved to the Sauber. Computer player Kamui Kobayashi drove the Sauber in Turkey. Ashley Blakeley missed the Non-Championship Monaco GP and also every race from India onwards. Ben Moody also missed the Non-Championship Monaco round and the Luxembourg GP.

A team created out of the remaining constructors, Virgin and Hispania. Computer players Timo Glock and Bruno Senna raced for the team in the Turkish Grand Prix and no-one else has driven for the team all year. In the lead up to the Non-Championship Monaco Grand Prix, Ryan Mackay and Tamburen signed for the Virspania team, although both drivers failed to make the race as neither car was ready. From Monaco Moussa Awada raced the Virgin and Luke Smith took the reigns of the HRT from the Belgian GP however both drivers missed the final race as the team split and failed to arrive in Abu Dhabi.

After much controversy in the 1st season of the Junior PS3 Championship bradley1314 put forward the idea to appoint a board of Stewards for the new championship consisting of three drivers who do not race in that championship.

There are also stupid penalties given by the game. Any disqualifications cannot be corrected but any penalties will be looked into and possibly reversed.

As of 22nd August 2011 all Disconnection points were done away with. One's already dished out were kept but further points would NOT be given.﻿

From the Non-Championship Canadian Grand Prix onwards several new rules will be added to the championship. 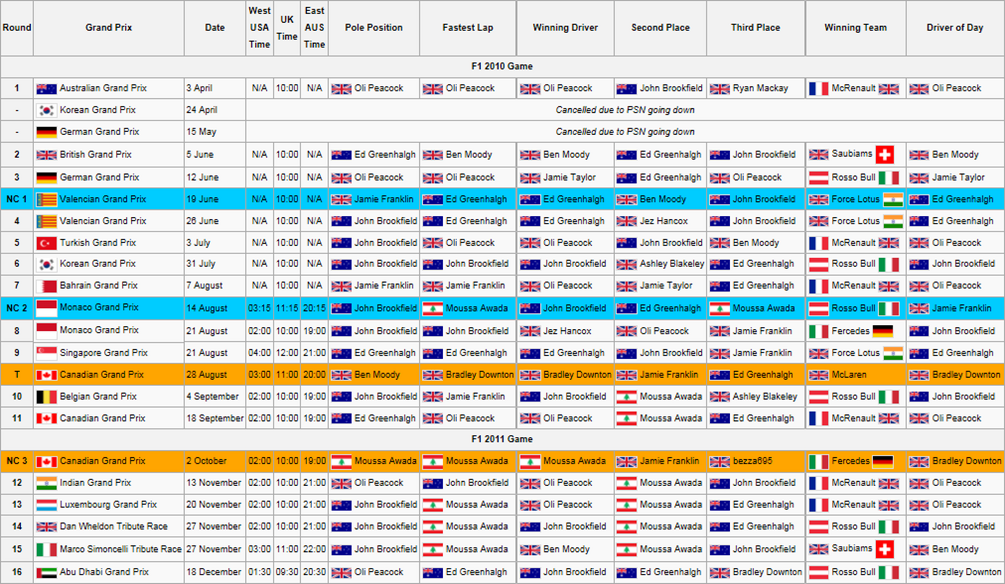 Rounds marked with orange are test rounds in which NO points are awarded.

† Drivers did not finish the Grand Prix, but were classified as they completed over 75% of the race distance.

Note: Rounds marked with Light Blue background indicate Non-Championship Race - Points are awarded on a reverse entry basis, ie If there are four entrants, the winner gets four points, second gets three, third gets two and fourth gets one.

DD indicates Driver of the Day﻿﻿

† Drivers did not finish the Grand Prix, but were classified as they completed over 75% of the race distance.

Note: Rounds marked with Light Blue background indicate Non-Championship Race - Points are awarded on a reverse entry basis, ie If there are four entrants, the winner gets four points, second gets three, third gets two and fourth gets one.

DD indicates Driver of the Day