The 2011/2012 F1F Formula One PS3 World Championship will be the first season of the revamped Official F1 Fanatic Junior series, although the second season overall. Ed Greenhalgh heads into the season with the number 1 on his new Ferrari and is looking forward to defending his Championship.

The season started on 8th January in Australia and finished on 11th March where the season ended in Abu Dhabi.

Drivers chose their teams in the order they finished last years championship. The current entry list is: 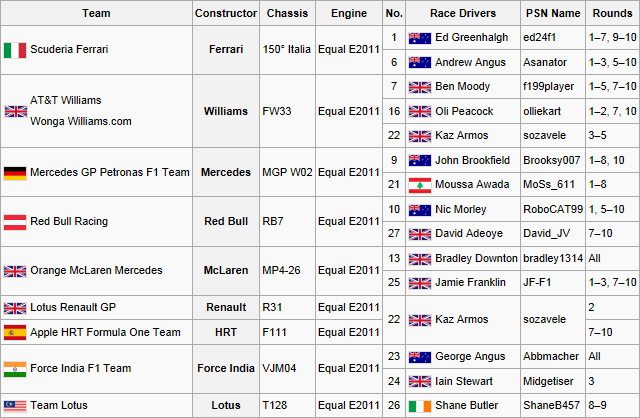 Reiging Champion Ed Greenhalgh choose to driver for Scuderia Ferrari. He was joined before the start of the season by Andrew Angus. Angus missed round 4 due to prior commitments while Greenhalgh missed round 8 due to the same reasons.

Ben Moody chose to drive for Williams and was joined for the first two races by Oli Peacock. Come round 3 however, Peacock's sponsorship fell apart and he was replaced by the well-funded Kaz Armos. AT&T withdrew as Williams' main sponsor after round 5 and thus the team were left with no funding to race at round 6, leaving both drivers without drives. Come round 7 in Belgium, Peacock announced he had major backing from wonga.com as well as many other minor sponsors, to race in rounds 7, 9 and 10. This sponsorship was enough to save the team and Peacock and Moody drove in Belgium, leaving Armos out in the cold. Peacock missed round 8 due to prior commitments and although he was meant to race in round 9, he missed his flight and thus also the race.

John Brookfield and Moussa Awada signed to drive for the Mercedes team. Both drivers missed the 9th round in Canada after their cars failed to arrive in Canada for unknown reasons.

Nic Morley signed for Red Bull but lost backing after the first race. He made an emphatic return for round 5. Red Bull expanded to two cars at round 7 and Morley was joined by David Adeoye.

Bradley Downton and Luke Smith signed to drive for McLaren. Unfortunately Smith's deal fell apart at the last minute and Jamie Franklin was signed to replace him. As a last minute deal Franklin only had sponsorship for 3 races, missing rounds 4, 5 and 6. He returned in round 7 at Belgium however with him and Downton announcing joint backing from Orange telecommunications.

Kaz Armos signed a deal with Renault to race in round 2 but they quickly withdrew from the championship, claiming they were not ready. After his stint at Williams Armos announced he had moved to HRT, with strong backing from Apple as well as many minor sponsors.

Force India confirmed that George Angus and Iain Stewart would race for the team. Stewart struggled with finaces however and so far the only race he has made was round 3.

As the race in Belgium finished Lotus announced they would be entering the Championship with Ireland's Shane Butler for the remaining three races.

The Calendar is as follows: 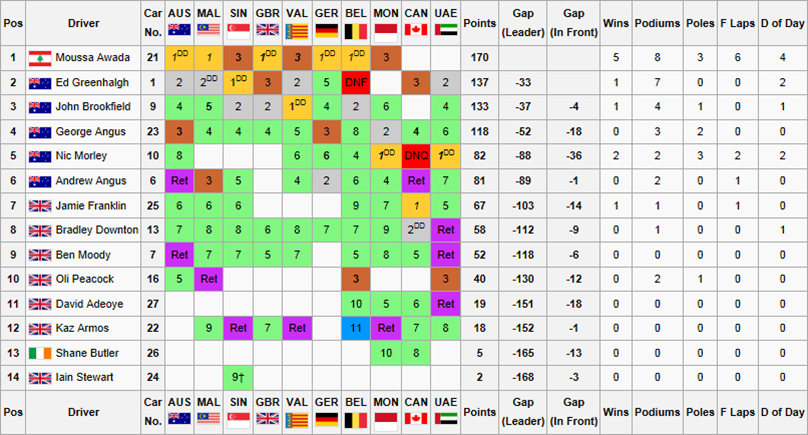 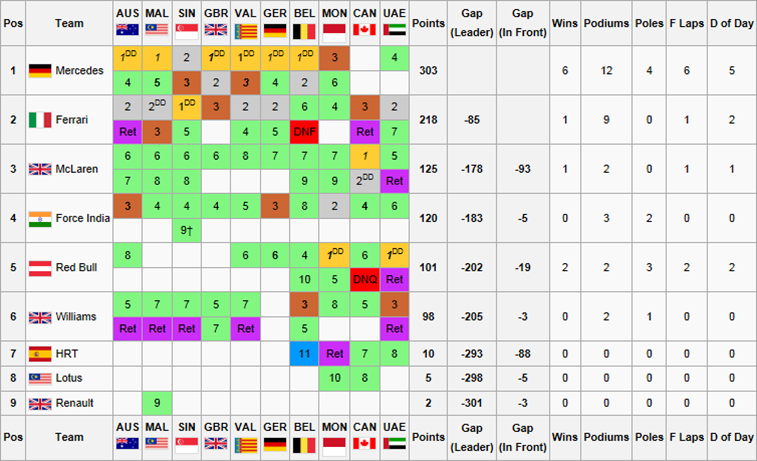