John Brookfield starts the season as defending champion having won the opening season. McRenault are the reigning teams champions but cannot reclaim their crown as they have been split into McLaren and Renault.

All drivers from the 1st season were given first priority and got to choose their cars in the order in which they finished the previous Championship. Due to the game using F1 2011 there is 16 spaces available, and these extra seats were advertised and quickly filled, with more than 16 people expressing interest. Due to this, Bradley advertised for more drivers in an attempt to restart the F2 championship. Car Numbers were assigned in the order of the previous year's championship, and new entrants were assigned numbers in the order they signed up. 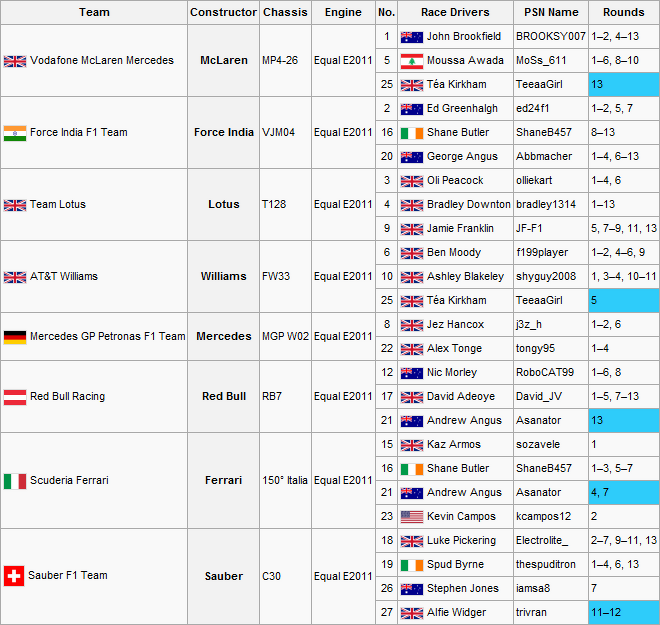 Teams will no longer be teams such as McRenault and Rosso Bull because they will instead return to as they are in real life, ie McLaren and Renault, and Red Bull and Toro Rosso.

McRenault split to McLaren and Renault, but the latter was denied entry due to being too similar in name to the 'Team Lotus' entry.

Rosso Bull split into Red Bull and Toro Rosso, but again the latter was denied entry due to being the sister team of Red Bull.

Saubiams split into Sauber and Williams.

Fercedes split into Ferrari and Mercedes.

Virspania was split into Virgin and Hispania, but both were denied entry due to being too slow in pre-season testing.

Reigning Champion John Brookfield left Rosso Bull to join McLaren in a shock move, and was joined by Moussa Awada, who starts a full entry into this years Championship after entering halfway through last season with Virgin. Brookfield missed round 3 due to prior commitments.

Ed Greenhalgh was unsure as to whether he would be able to enter or not, and thus left his entry late. By the time he decided to enter, only seats at Force India were left, leaving last seasons runner-up joining the Indian team. He is joined by George Angus, who makes his debut in this Championship, having driven again for Force India in the Winter Series. Greenhalgh missed rounds 3, 4 & 6 due to prior commitments and Angus missed round 5 for the same reason.

After being dropped by McLaren to make room for Brookfield and Awada, Oli Peacock and Bradley Downton made the joint decision to join Team Lotus. This decision was mainly influenced by Downton's positive response to the car during testing, stating 'It is a car that really suits my style'. Peacock missed round 5 due to Karting commitments and was replaced by guest driver from F2, Jamie Franklin. After the sixth round at Monza, Peacock announced his withdrawal from the Championship, with Mercedes' Jez Hancox named as his replacement later that day.

Ben Moody and Ashley Blakeley remained with the Williams team after they shared the single car last season, (with the driver who wasnt in the Williams driving the Sauber), they will both get a Williams this year. Moody missed round 3 due to prior commitments, while Blakeley missed races 2, 5 & 6. The first ever female driver, Téa Kirkham (from the F2 series) made a guest appearance in his place at round 5.

Jez Hancox and Jamie Franklin remained with Mercedes, although Hancox did move over from Ferrari, from when the team was Fercedes last year. On 22nd March 2012 Franklin announced a change at work meant he would be working Sunday mornings, thus missing the races. Alex Tonge was announced as his replacement later the same day and will make his debut in this championship at the first race. Later still on the 22nd, Franklin suggested the propsed F2 series be run on Saturday's so he could still race. Downton agreed and put Franklin in charge, so that 'someone he knew and trusted was running the series'. Hancox has not been to a race since round 2, believed to be due to battling drink issues, while Tonge missed round 5, leaving Mercedes with two cars, but no drivers. Hancox returned for round 6 but Tonge announced he was withdrawing from the Championship. With Hancox joining Lotus after Monza, Mercedes made the decision to withdraw from the Championship, blaming difficult economic times.

Nic Morley joined Red Bull from the Force India side of Force Lotus, the team he raced for in the Winter Series, and was joined by Winter Series teammate, and newcomer to this Championship, David Adeoye. Adeoye missed round 6 due to prior commitments.

Kaz Armos and Shane Butler, who both raced for the first time in the Winter Series, will both debut in this year's Championship. They will pilot the Ferrari cars. After the first race finished Armos announced his decision to drop into the F2 league, so he would feel more comfortable. There was then a space in the F1 League, which was dully filled by Kevin Campos. Butler missed the fourth round, while after round 2, Campos announced he would have to postpone his entry due to sponsorship issues. Andrew Angus made a guest appearance for the team at round 4, and is apparently being lined up for more.

Sauber, the final entrant into the Championship will field Luke Pickering and Spud Byrne. Both are rookie's in the F1F Series but have raced well in both seasons of the Collantine Cup. Pickering announced he would miss the first race due to a mix up of his flights, while Byrne missed the 5th round for the same reason.

15 of the 16 signed drivers particpated in the opening weekend, with only Luke Pickering missing out due to a mix up with flights. Moussa Awada took the first pole of the year from his teammate John Brookfield, while a disconnection for Kaz Armos meant only 14 cars would take the start. A LAG incident between Brookfield and Oli Peacock at the start caused a serious incident in which Bradley Downton went airborne, but survived with just a broken front wing. The race was marred by many more incidents as Awada won from Ed Greenhalgh and Ashley Blakeley.

The second race of the Championship became famous for the collision between Lotus teammate Bradley Downton and Oli Peacock, in which Downton lost his front wing and suffered a puncture, and Peacock was subsequently penalised with a grid penalty for the next round. Moussa Awada won his second race out of two from Peacock and Nic Morley, who was involved in a LAG incident with Downton late in the race, putting the Brit out on the spot.

Moussa Awada made it three from three, but only after Luke Pickering managed to break his run of pole positions, with Oli Peacock in second and David Adeoye clinching his first ever podium third. There was a sizeable accident on the second lap involving George Angus, Nic Morley and Alex Tonge that brought out the Safety Car. Pickering eventually finished fourth.

Moussa Awada claimed his fourth win from four races here with Bradley Downton claiming his first podium of the season in second during the final laps. He was quicker than David Adeoye and was able to pass him for third, and both men then passed Oli Peacock, who was suffering with tyre and fuel issues, to move into second and third. Peacock was just beaten to the line by Luke Pickering.

Qualifying was dry and it was no surprise as Moussa Awada stormed to his fourth pole position, joined on the front row by teammate John Brookfield. The pair were 6 tenths clear of 3rd placed Ben Moody while David Adeoye suffered a disconnection during the first few minutes of the session. The race started wet, and the whole field started on the Intermediate tyres, with the exception of Downton, who started on the Full Wet, banking on more rain. Moody got a fantastic start from 3rd, taking the lead into turn 1 with Awada and Brookfield both dropped down the field in the opening lap, while Nic Morley, Downton and Shane Butler all moved well up the field to second, third and fourth respectively. Downton took second from Morley at the end of the lap, while Moody already had a two second lead. On lap 3 Butler and Downton collided, taking Morley off with them. Moody won from Awada and Butler, who recovered well.

Shane Butler took a shock pole position as many of the main front-runners decided to qualify on the Prime tyres while Butler chose the Options. Butler held on in the lead for a while but was finally overcome by John Brookfield, who went on to win, before an incident with Luke Pickering that put both men down the field. Moussa Awada can home in second with Bradley Downton crossing the line third, but being demoted to fourth with a time penalty, giving Pickering his first ever podium. Pole-Sitter Butler was fifth.

Championship leader Moussa Awada failed to make the Spanish Grand Prix due to connection issues, and his teammate John Brookfield dominated. He took pole and fastest lap, the first time this season someone other than Awada has set it, and eventually claimed the win, despite not crossing the line first. That honour went to Ed Greenhalgh in his final race for a year as he sets off travelling in Europe, with Brookfield crossing second and debutant Stephen Jones in third. Greenhalgh was issued with a time penalty for corner cutting however, and was demoted to third, promoting the other two men.

In what was the first wet Qualifying session of the year, Jamie Franklin, having been offically announced as a Lotus driver for the rest of the season before the weekend, stole pole position in the dying seconds from John Brookfield. In a wet race however Franklin could not hold on and was soon overcome. A poor choice to pit for fresh wets by him and Shane Butler, who has now replaced Ed Greenhalgh at Force India, left them at the back while Brookfield won from his teammate Moussa Awada, who suffered a puncture on the last lap while battling his teammate, and George Angus, who picked up his first podium.

Moussa Awada stormed to and easy pole position while both Lotus cars decided not to qualify, enabling them to start on fresh tyres and attempt 1-stoppers. Ben Moody failed to start with disconnection issues but in the race McLaren stormed to an easy 1-2 with Awada winning from John Brookfield. Brookfield could have been closer to his teammate but was momentarily held up mid-race behind the 1-stopping Bradley Downton, who did well to claim 3rd, his second podium of the season, from the back row of the grid.

Once again Moussa Awada took pole, but he had to fight for it as Shane Butler got within 1 second of him. John Brookfield had a strange Qualifying session in which his car exploded and left him last on the grid. The race started cleanly again and Bradley Downton moved into 2nd from 4th on the grid. Mistakes dropped him back to fourth though past Butler and Asley Blakeley. Awada claimed a comfortable victory from Butler, with Brookfield taking third after two failed attempts from Downton to pass him.

The Calendar has been drastically changed from the first season with 6 races added and 3 removed. 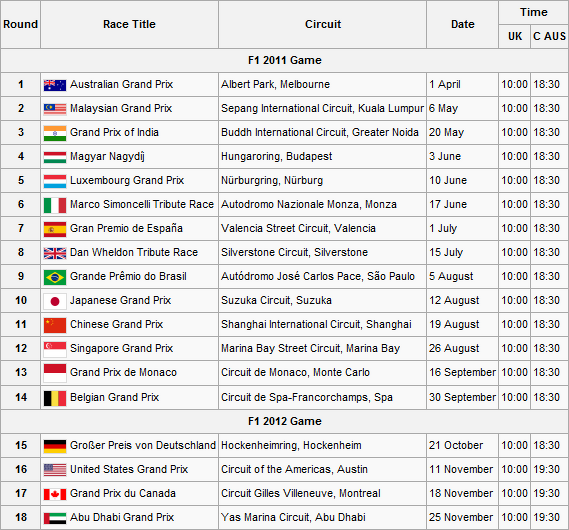 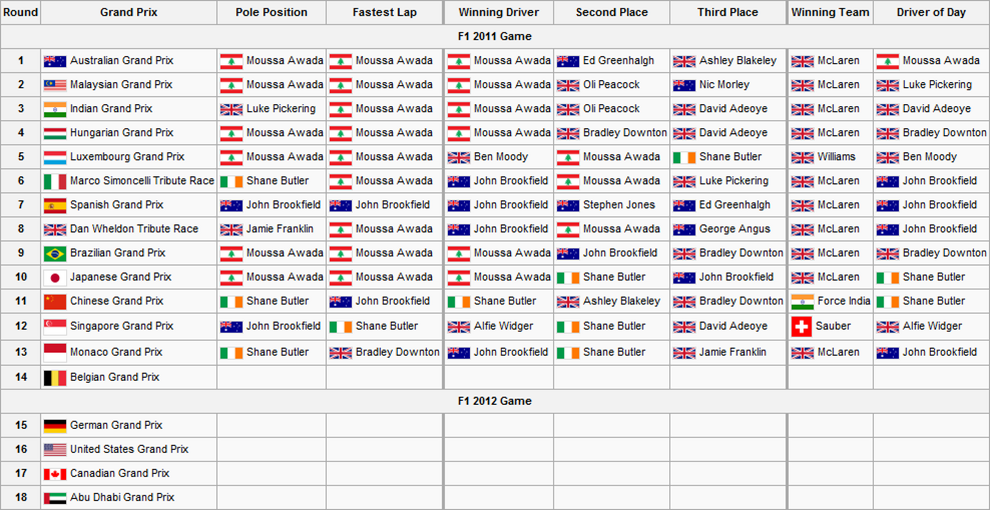 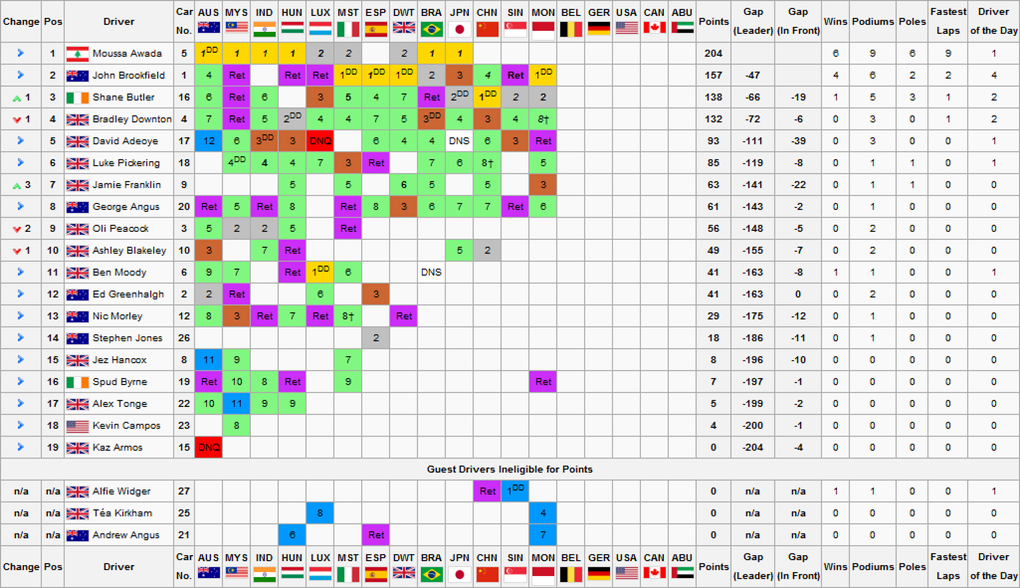