While Downton will still oversee the Championship he will hand over the reigns of this second tier to Jamie Franklin who had to leave the top tier after a change at work meant he was working sunday morning's, thus missing the 'top tier' races. His idea to have the F2 Championship run on Saturday's was accepted by Downton, and set up on the 23rd March 2012.

The season got off to a slow start, with only four drivers managing to compete in the first race, all of which were from different teams. Tom Robson of McLaren was able to take the honours of the first race, scoring his maiden win, after Alfie Widger in the Sauber qualified on Pole, but was only able to finish second, and the first Swedish driver of the series, Filip Nilsson completed the podium.

Jamie Franklin returned to the series in Malaysia, scoring McLaren's first pole position of the year, and their second victory, with Tom coming home in second, and Alfie third, whilst the Swede, Filip Nilsson retired halfway through the race.

McLaren continued their mighty form in India, scoring yet another pole position and win, with Jamie again, who was now starting to become a favourite for the title. The race was much closer than Malaysia, and Jamie narrowly took the victory after receiving a drive-through penalty. The Mercedes team showed up, this time with a different driver. The Brit, Gareth Parles, who brought the car home in fourth place.

Hungary looked like it would produce a different winner, when Tom and Jamie tangled on laps one and two, into turn one, whilst the Mercedes driver, Gareth Parles, jumped into the lead for the first stint. However, with some quick thinking and great strategy calls, combined with superb pace. The McLaren drivers were able to close the gap, and pulled off their second one-two of the year, again led by Jamie Franklin.

Tom Robson was able to claim his first pole position at the Nurburgring, with Alfie looking just as quick, if not quicker on the primes. Jamie's run of wins looked like it was coming to an end. This was also the first race in which more than four drivers turned up. The top three were accompanied by Kaz Armos in the Red Bull, Téa Kirkham, the first female driver of the league, also in the Red Bull, and Ben Hughes, the Australian in the Ferrari. The race started wet, and although Téa briefly took second after starting fourth, she went wide at Turn 3, and the two McLaren drivers had the early pace, pulling a gap to Alfie and the rest of the field, with Jamie taking the lead on lap two. The race dried out, but the order stayed virtually the same. Jamie, Tom and Alfie completed the podium, with Téa bringing the car home in an impressive fourth place.

Monza looks set to be a great spectacle, but can it produce a different winner? And can somebody break Jamie's impressive run of four consecutive Grand Prix victories?

Car number's will be assigned in the order that the drivers join the Championship, and car selection will be done the same way. The only exception is car number 1, which will not be run due to there being no previous Champion. Instead, Jamie Franklin (who signed up first), will be given car number 0, with the others who sign up getting car numbers 2, 3, 4 etc. 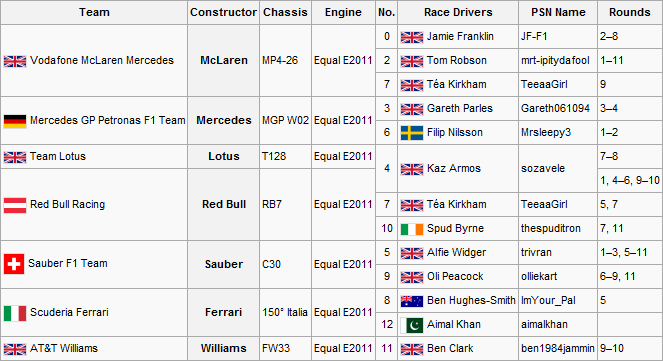 The same teams run in F2 as in the F1 league. They are:

Teams not entered are:

Gareth Parles announced he would also be joining the series, driving for Mercedes.

After the opening round of the F1 Championship, Kaz Armos stated he felt uncomfortable being among so many drivers, and thus choose to drop to the F2 league, with Kevin Campos replacing him in the F1 league. Armos joined Red Bull.

Alfie Widger, another newcomer to the series announced he would like to join and chose Sauber.

Filip Nilsson became the first Swedish driver in the series when he joined Mercedes.

Armos was then joined at Red Bull by the first ever female racer, Téa Kirkham.

Shortly after, good friends Sean Hansford and Ben Hughes-Smith signed up to drive for Ferrari.

All races will start at 10am UK Time on a Saturday.

The Calendar will follow the F1 calendar, but with races on the Saturday's rather than the Sundays. 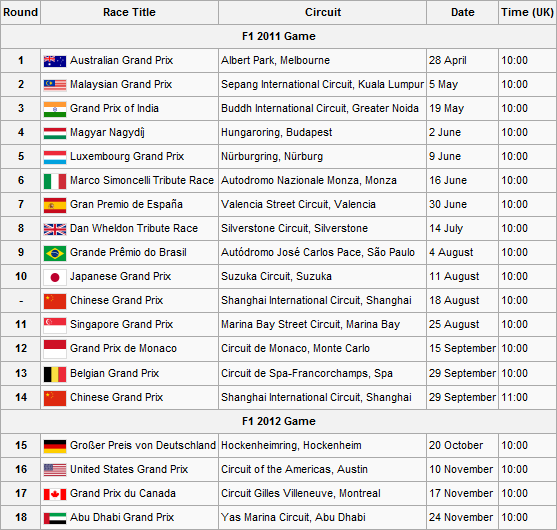 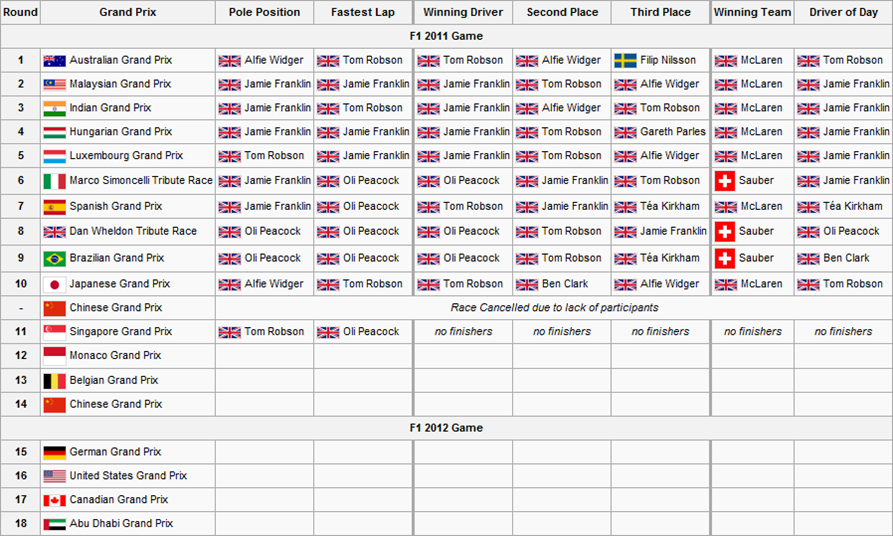