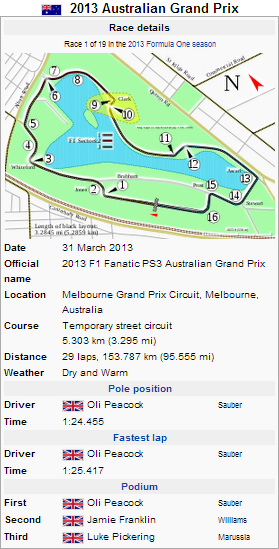 The Australian Grand Prix was the opening round of the 2013 F1F Formula One PS3 World Championship. The whole session was dominated by Sauber's Oli Peacock who took pole, fastest lap and the race win. Jamie Franklin finished second on his debut for Williams while Luke Pickering rounded out the podium for Marussia.

Was a good solid lap, maybe a couple of tenths on offer if i hooked up the sectors.

Good start for Primes and covered the inside line and pulled out the gap until the SC which was just aweful timing fortunately Jamie went options again but it didn’t help me. Eked out my Primes to Lap 20 thanks to some smooth driving allowing Jamie to close up. Stuck on the options late so i could cover SC and not have to worry about Deg, pushed hard and took the fastest lap. Tried to 360 it on the line but ran out of fuel and just ended up reversing away from the line. This allowed Bradley to unlap himself.

Qualifying got off to a poor start as I messed up my first lap and put the car in the wall (a trend that was set to continue). I pitted for fresh tyres after setting a time (just so I had something on the board) and came back out. Absolutely nailed the lap and just broke the 1:25′s to go third. Tried to improve on a final run but messed up at turn 1, crashing into the wall after spinning on the kerb. Then got pushed to fourth by Tom.

Got a good start past Tom and avoided Jamie into turn one as we slotted into second and third. Then everything went wrong. I can’t remember exactly what happened but I spun countless times, hit countless walls and eventually was lucky to recover to sixth. Had some good fights with Tom and George but mainly my race was a huge disappointment. Just as Ryan crashed to bring out the safety car I crashed and lost my front wing so used it to stick the Primes on. This might have worked had I not crashed with fifteen laps to go and had to pit again. I used the Option tyre until the end. Poor race from me, hoping for better in Singapore.

Quali went okay. My first lap was pretty bad, but my second attempt felt much better, though it wasn’t enough to stand against Oli…on his primes :(. Went back out with 6-7 minutes to go, and managed to go 3 tenths quicker on my first run, I tried again, but lost a couple of tenths in the first sector and backed off completely to save the tyres.

I tried to go out again in the dying moments of the session, but the team didn’t get me out quick enough, and I missed a final run by about 10 seconds, leaving my third, 6 hundredths off of pole, and 1.5 hundredths behind Tom in second.

Got a very clean start off the line, out-dragging Tom into turn one, and getting very close to Oli. There was a bit of a kefuffle behind me, and Alfie emerged in third. I made an error, allowing him to close up, but then he decided to spin at turn (13?) and left me chasing down Oli. I wasn’t as quick as him, that was obvious, and by lap 4 he was a good 3-4 seconds in front, but then the SC came out. I gambled on a very early pit stop. In hindsight I should have gone for the primes, as they were a very good race tyre today, but I went straight for the options, hoping to prolong my time on the faster tyre and hopefully pick people off when their tyres went off.

I came back out in 4th, behind Harry and Electro. At the restart, Harry made a mistake into turn 1, gifting me third place immediately, and then on the next lap, Electro literally gifted me second at the same place, so thanks for that :P My pace was very good at this point, and I started catching Oli. At one point, I was half a second behind him, but screwed up when I eventually got DRS, and lost almost 2 seconds. I pitted on lap 17 for primes, and found that they felt really good. I closed a little on Oli during this time, and he came out just in front of me when he pitted a couple of laps later. After that, there was no hope. He was on the faster tyre, and although my laps were very consistent, I just couldn’t match him. Second was definitely the best I could have hoped for today, so I should be happy about that.

Standard qualifying, only got one lap, put on fresh set of tyres for final run but missed the flag but 3 seconds so wasted tyres and I had to start the race on worn ones.

Quiet race, at the start did not use KERS and backed off to avoid incidents in the first corner and work through other people having issues. Got a penalty for tapping Ryan when he locked up, it could have been lag. All going well until the safety car, up to 5th. Post safety got completely squeezed into the wall by David and then pushed off track by Alfie, however these could have been lag too, final incident got pushed off the track by George, this also could have been lag.

I fear I may have been lagging as on my screen, Alfie, Ryan, Tom, Harry, Oli, George were all lagging, so if it was me tell me.

The car felt really good in qualifying, which surprised me given that the setup was aimed for race pace. I did 2 laps on my first set of options which left me in third until Bradley went two or three tenths quicker and demoted me to fourth. I had been considering not doing another lap, but since I was moving down I decided to go for it. I made a mistake on my first flying lap and backed off completely and saved fuel for one last go. The lap went very smoothly and my last sector was far better than the one on my previous timed lap. This left me second, four hundredths off of Oli.

I made a poor getaway and was down to fourth before the first corner (both Williams launched very well!). Before I could turn in I got a large knock on the back of my car and ended up beached in the gravel trap. This left me around ten seconds off of the pack, in last place. I started to make progress until around lap three or four I lost the rear end of the car in sector three coming out of the high speed chicane. I lost my front wing and pitted for a new one and put on some fresh prime tyres (just in case I could get them to last). Luckily for me the safety car was then deployed which meant that I wouldn’t have to close the gap all over again. Bradley and Abbmacher(?) pitted the next lap, and rejoined behind me. At the restart I was unable to attack the car ahead (can’t remember who it was), a couple of laps later Bradley managed to get past me after touching the back of my car under braking, it may have been down to lag though. I closed the gap to Bradley but couldn’t make a decisive move, until I got a chance two or three laps later. I managed to get a good distance past around the outside at T3, but Bradley managed to force me wide by braking late. This left me wondering how I was going to get past, but before I got another chance Bradley spun off at T1. This left me in P6 around four seconds behind Alfie. I turned up the engine and chased him down. I comfortably got past him in the DRS zone a few laps later, though unfortunately for me this seemed to wake Alfie up a bit, as his pace increased after that. I was able to keep him just outside the DRS zone but couldn’t really pull a gap. Most people around me pitted on lap 17, so I decided to stay out for one more lap since my tyres weren’t too bad. I rejoined ahead of Alfie and around four seconds behind Harry. The pressure was lifted a few laps later when Alfie binned it somewhere in sector 1 (or 2?). I had a fair amount of excess fuel left so I again turned up the engine and chased after my teammate. I managed to catch up, but didn’t try anything silly when I got there. I got a good opportunity in the DRS zone and managed to get my car up the inside and kept the position at T3 despite braking a bit late. The podium was too far away for me after this though, as I was over eleven seconds behind Electro. I managed to close the gap to under seven, but there just wasn’t enough time.

Good race overall, it’s nice to know that the car was competitive in both sessions. Hopefully luck will be on my side next race!

I got a decent start from 5th but saw that Tom wasn’t blessed with such luck. Then, he broke early (or I missed the braking zone, my bad if that’s the case *derp*) which slowed me down. A lot of people flew by only for me to turn the corner and go into the back of a Marussia which disappeared up the road (literally) second to last. Not looking great for caterham at this point. So thanks to various spins, trips to the gravel, and otherwise, I somehow ended the lap in 6th. I proceeded to have an amusing battle with Ryan, and after passing him multiple times and him teleporting up the road, he eventually span it coming out of the fast chicane. 5th. Then a lap later he crashed, and the SC was out. I was extremely surprised to see Jamie and someone else peel off into the pits, gifting me 3rd. At the restart I nailed the exit of the final turn, then fluffed it at T1 as Jamie said and pretty much said “here you go”… I found myself too slow to keep up with the top 3, and everyone else behind was battling. Eventually I was losing some time to Alfie behind but I also sometimes pulled away. Lap 17, by now Tom is in 5th and slowly closing me down. I pit, emerge in 5th. He pits a lap later and I emerge 4 seconds in front. He gradually starts closing me down, until a mistake at the fast chicane lets him right onto my gearbox, and then a small slide out the last turn ruins any chance I had of defending DRS. I stayed with him for a lap or 2, but he was too quick. Nonetheless, I kept the fuel on rich, and tried to pressure him into a mistake which would gift me 4th. However, I only started gaining again in the last 2 laps or so, and after a couple of slides, turned the fuel mix down to lean so that I could make it to the finish. 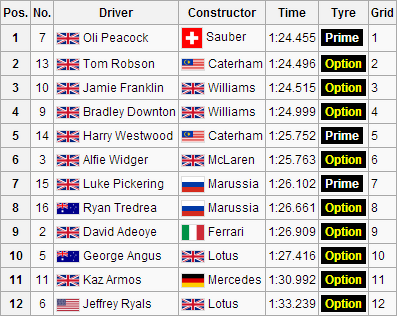 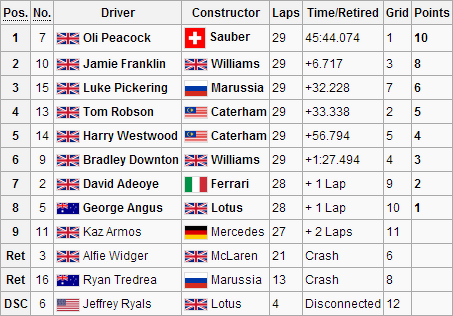