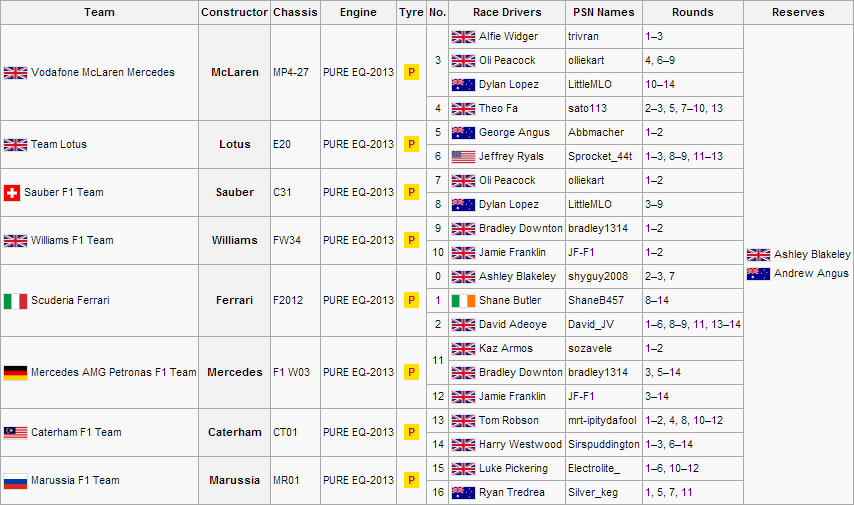 While Marussia and Caterham make their debut's in the series Red Bull and Force India are left out.

Reigning Champion Shane Butler returned to the team he started his Championship winning campaign with, Ferrari. Butler however soon announced he would not be able to participate until round 8 (Italy). As such Ferrari sought out a replacement driver for the first seven races. It has been confirmed the seat will be shared between Ashley Blakeley and Andrew Angus. Butler is joined at Ferrari by David Adeoye who leaves Red Bull after they leave the Championship.

Reigning Constructors Champions McLaren lose both Moussa Awada and John Brookfield as both drivers decide to take a sabbatical from the Championship. F2 runner-up Alfie Widger was their first signature and Theo Fa joins in his rookie season.

Lotus drivers Bradley Downton and Jamie Franklin announced they would be leaving the famous Black and Gold team to join Williams, meaning the former team were left to find two new drivers. George Angus joined from Force India and will be joined by American newcomer Jeffrey Ryals.

Sauber's season fell apart towards the end of last season and they looked for a brand new driver line-up who could produce some more consistent results. After sacking Luke Pickering they signed Oli Peacock to replace him. Téa Kirkham, F1F's only lady racer will partner him at the Swiss team.

As both Williams drivers announced they will not be returning, the team looked for replacements. They were the first team to announce their driver line-up as they confirmed ex-Lotus pair Bradley Downton and Jamie Franklin.

After withdrawing after just six races last season Mercedes return this year with a point to prove. Rookie's Kaz Armos and Sam Crawford make up the German squad's first real assault on the F1F F1 Championship.

Caterham mark their first season in the Championship with a strong line-up of the reigning F2 Champion Tom Robson and newcomer Harry Westwood. The latter impressed in the winter series with some strong pace, but did appear to be a bit reckless.

As Marussia enter their first season in the sport they bring with them two men from the other famous racing series, the Collantine Cup. Luke Pickering joins from Sauber while Ryan Tredrea will make his debut in the series.

§  The philosophy hasn’t changed since last season: if you have a grievance about something that happens on track involving another competitor, do NOT make angry, accusatory, childish comments in this thread. We do not accept or put up with that sort of thing in this series. That is your one and only warning. If you have an issue with someone else, first of all remember that this is a video game and if you’re really that upset by it, you should maybe reconsider your life priorities. Secondly, if you wish, contact the person with whom you have a grievance in private, either through F1F PM, PSN or another private channel.