Every practice session was dry and Downton proved quick, consistently in the top 5 in all three practices. Vettel, Hamilton and Vettel again topped the respective practice sessions 1, 2 and 3.

Qualifying started as a wet and unusual affair. Driver's trickled out on a mixture of the full wet and intermediate tyres, having no prior experience on either. The inter turned out to be the tyre to be on and everyone eventually set laps on it, with Vettel the fastest in a fully wet Q1. Rookie Downton easily claimed his place in Q2 with 5th, 16 places ahead of his teammate Barrichello. However, Rubens Barrichello, along with Paul di Resta, Kamui Kobayashi, Sergio Perez, Sebastien Buemi, Jaime Alguersuari, Heikki Kovalainen, Jarno Trulli and Timo Glock did'nt set a lap time in Q1, meaning Barrichello and di Resta got through on car numbers. No reason was given for these drivers not setting laps although it has been suggested there were numerous factors. Due to this Jerome d'Ambrosio made Q2 in only his first and both HRT's made Q2 for the first time ever.

With the two HRT's and d'Ambrosio's Virgin set to go out after poor practice times there were only 4 more drivers to fall in Q2. It started wet but dried towards the end, sparking a mass influx of drivers on slicks. There was just enough time for everyone to set laps although half set times on slick while the others remained on inters. The four spots were taken by the two Force India's who had also struggled and also the 2 Renaults who were shocked to be knocked out by the two Williams drivers of Downton and Barrichello however it was Alonso who was on the cusp of going out in Q2 with the Williams' 3rd and 7th.

Q3 was bone dry and the field expected a Red Bull front-row lock-out. On the intial run's this was the case, with Vettel quickest from Webber and Button. Downton decided to lap o nthe prime tyre, and unsuprisingly ended his first run in 9th, albeit ahead of teammate Barrichello, who'd lapped on the option. While the other 9 drivers pitted Downton continued on the prime, and went purpe in sector 1. Then sector 2, and took provisional pole by over a second on the slower tyre. With this in mind everyone was expecting great things from the soft-tyred driver and Vettel was first over the line, Despite imrpoving his time by three tenths, he was still 7 behind Downton. The closest challenger to Downton came in the form of Button's McLaren, who was still 4 tenths off however. Webber took third and Vettel was pushed down to 6th. Downton's teammate Barrichello abondened his second run and finished tenth. After qualifying Downton hailed his lap perfect and had the paddock scratching their heads as to how Downton had got so much from the prime tyre. 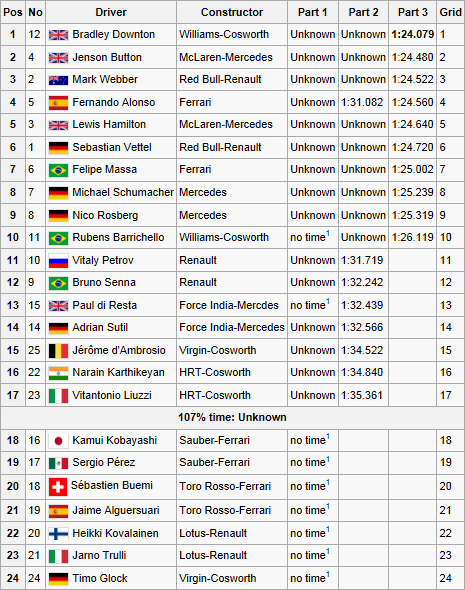