This is the first season of Bradley Downton's F1 2012 Career. He signed to race for Caterham, replacing Vitaly Petrov.

The season began in Australia with Lewis Hamilton taking the first pole position. A clean start gave him the lead of the race but reigning Champion Sebastian Vettel was immediately in trouble at turn 3 when Kimi Raikkonen span and caused everyone to brake hard. Vettel and Pastor Maldonado were caught out and lost their front wings. As the race went on Hamilton, Mark Webber, Fernando Alonso and Sergio Perez broke away from the field due to Bradley Downton's Caterham being in 5th. He had got a great start and the turn 3 hold up had helped him into that position. gR He was also very vigorous in defence, not allowing anyone past, but quite slow, thus allowing the top 4 breakaway. Alonso eventually retired from the lead with a gearbox problem, and Perez jumped Webber in the pitstop s for second as Hamilton took a comfortable win. Downton fell back down the field due to DRS and mistakes and eventually finished 18th. His teammate Heikki Kovalainen was disqualified for ignoring several 'Damaged Car' flags.

After an appalling opening race Sebastian Vettel managed to take pole in a wet Qualifying session at Sepang. Rookie Bradley Downton also impressed as he pulled the Caterham into Q3 for the first ever time, and impressively put it 5th on the grid. The race started dry and Downton took the lead from Vettel and Fernando Alonso, defending hard when the others used DRS. This continued until Alonso misjudged a DRS move, swerved too aggresively from behind Downton, and span into a wall and into his second retirement from two races. He wasn't the only one however, Button, Schumacher, Vettel and Webber all collided with the rear of Downton's Caterham through DRS moves, breaking their front wings. Alonso's teammate Felipe Massa joined him on the sidelines 7 laps later when he retired with a gearbox failure. Downton was surpassed for the lead on lap 20 by Bruno Senna, who still led as rain started to fall on lap 25, catching Lewis Hamilton out on lap 29 when he hit some wet grass and spun, collecting Kimi Raikkonen and taking them both out. Senna had eeked out a 20-second gap on Downton by the time the drivers pitted for Inters on lap 32, apart from Downton, who went straight to the wets. The rest of the field pitted for wets two laps later and Downton moved back into third, having spent three laps nursing his car around, behind Senna and Nico Rosberg. Downton gradually fell down the field as the rain intensified, colliding with Nico Hulkenberg and earning a drive-through. A few laps later he spun at the penultimate corner and was collected by Sebastian Vettel, taking the Champion out on the spot. From there Senna won comfortably from Perez and Vergne, with Rosberg retiring on lap 51 with an engine failure. Webber and Ricciardo collided from 5th and 6th on the penultimate lap, taking them both out, but Webber still claimed the final point as Kovalainen and Downton were too far behind, the Caterham teammates switching places on the last lap as Downton slid off the track. 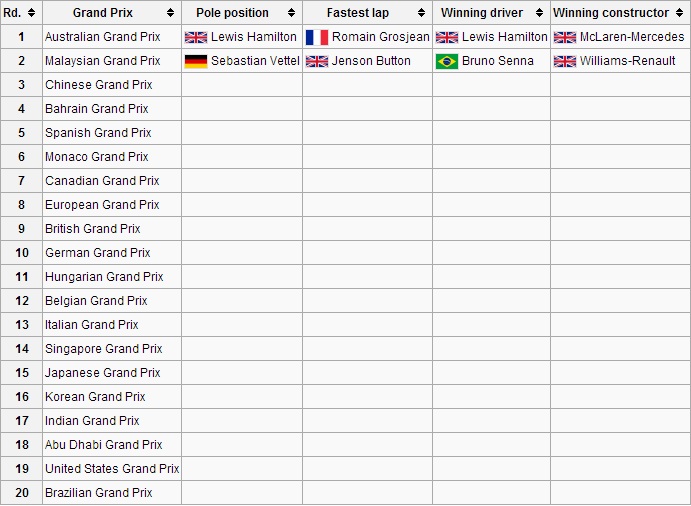 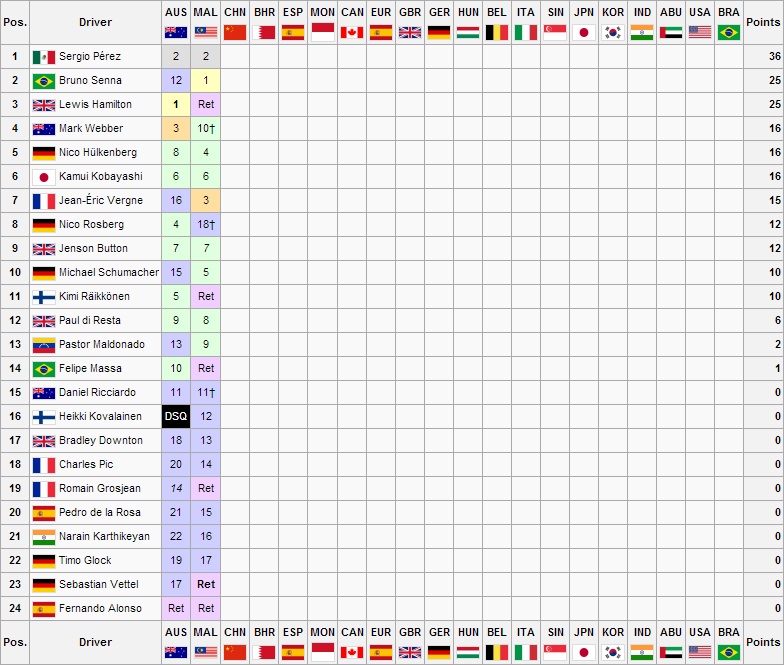 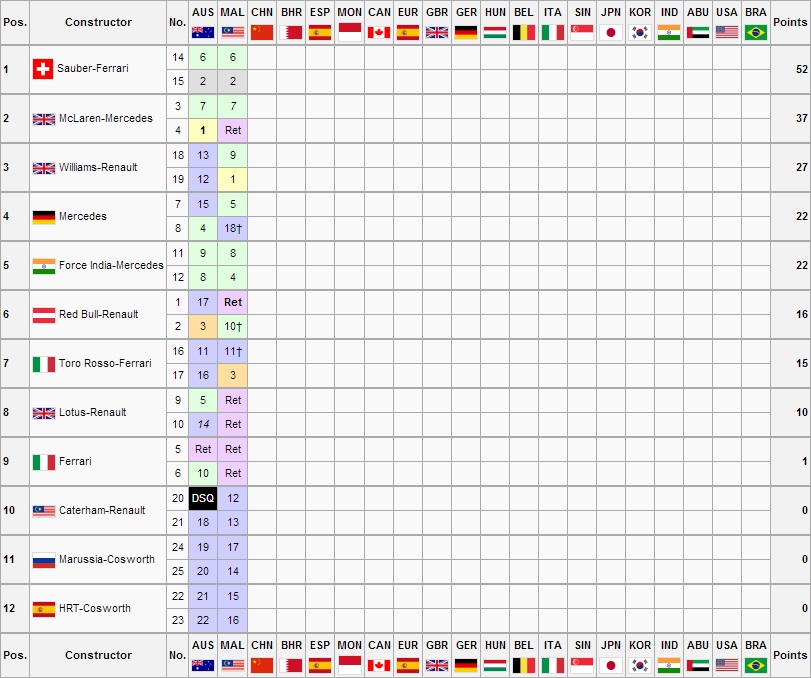