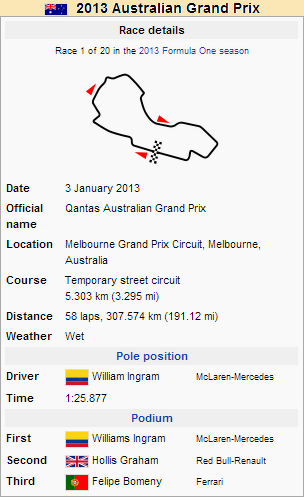 The Australian Grand Prix was the opening round of the Random Forum Championship Game Season 1.

The race, contested over 58 laps, and in the pouring rain, was won by McLaren driver William Ingram, who led home Red Bull's Hollis Graham and Ferrari's Felipe Bomeny. Home favourite Nic Morley was unlucky to retire late on with a mechanical failure.

The first practice session produced some intersting results with five different makes of car taking the top five times. Ferrari struggled to find a good race pace however, Bomeny and Mathershaw struggled down in twelth and thirteenth.

While the first practice session focused on race setup, the second session was geared around finding one lap pace, and it was clear McLaren had this as they topped the timesheets throughout the session. Caterham put in a strong performance with eleventh and thirteenth, sandwiching the Red Bull of Hollis Graham, who had a poor session. Both Force India's languished towards the bottom of the times sheets and were surpsingly joined by Mercedes, who just could not set the car up.

The first part of Qualifying yeilded little surprise in who would go out, but still managed to be entertaining. Hofman's HRT never really got going and he ended up 3 tenths behind Peacock, the man whom he shared the back row with. Kirkham put in a fine performance to outqualify one of the Marussia cars in 22nd while Sunderland was disappointed his Caterham could only make 21st. Cucamest's Toro Rosso and Haddleton's Force India were shock eliminations from Q1 after neither could hook up a fast lap on the option tyres, and both caught traffic. That left a straight fight between Bull Frog's Marussia and Andae d’Hazorme's Caterham, which ultimately, the Marussia won, meaning a spot in Q2 beckoned.

Frog was never expecting to progress from Q2 but put in a valiant effort to be less than a tenth behind Coolidge's Williams. Kaz Armos and Ben Needham, Force India and Toro Rosso's hopes respectively, could only manage 15th and 14th while Mercedes surprised everyone, losing both cars in Q2. Morley nearly made Q3 at his home race but missed out by 2 thousandths of a second.

Williams Ingram takes a fantastic pole position for the first race of the season in the dying seconds of the session from Red Bull’s Johnny Kingshark. Alfie Widger led for most of the session, and many were tipping him to take pole, however, both Johnny Kingshark and William Ingram were both able to improve in the final part. Kingshark particularly surprised, managing to improve upon his Q2 time by a massive 1.2 seconds!

The two Lotus drivers, Bradley Downton and Jamie Franklin lined up behind them in limbo, a few tenths off of the top 3, and 2 tenths from the second Red Bull driver, who was unable to extract the same from his car, finishing 7 tenths from Kingshark. The Ferrari drivers, Bomeny and and Mathershaw were close once again, only separated by one thousandth of a second by the end. Sauber took the remaining slots, but were still 4 tenths behind the Ferraris, and 1.4 seconds from pole position.

Lap 1: McLaren get off to a great start, with Widger taking second from Kingshark into turn 1!

Lap 1: The Lotuses don’t get off to a great start, Downton losing out to Franklin, Bomeny and Graham. The Red Bull driver also being able to barge his way past Franklin.

Lap 4: Coolidge was doing so well, having made so many places up, but it looks like he’s collided with Tom Robson, and both drivers are out of the race! That was a nasty collision…

Lap 14: Johnny Kingshark up the inside of Widger and re-takes his second place. He looks set to chase after Ingram now!

Lap 18: Oh no! After looking so quick in the wet, Oli Peacock’s car is slowing, but wait…the HRTs are struggling to get around him, and it looks like they haven’t seen the two Lotuses coming to lap them. Ah! That’s both of the Lotuses out, as they crash into the back of the HRTs, collecting Peackock’s Marussia in the process! Debris all over the track, this is mayhem!

Lap 19: The Safety car is out! The field closes up, but not before Chan’s Sauber receives a puncture from the debris. The car looks to have suspension damage, and he is out of the race!

Lap 24: That took a long time to clear the cars and the debris, but the safety car is coming back in.

Lap 25: Shane Butler is definitely taking advantage of the bunched up field and the weather, moving up into 9th now.

Lap 29 Hollis Graham is now lining Alfie Widger up for a pass…and he’s through! Taking third place from the second McLaren.

Lap 33 Felipe Bomeny is looking very strong at this point, as he too drives around the outside of Widger! Both drivers lucky to stay on the road there in such tricky conditions.

Lap 38 Kevin Cucamest pulls into the pits, having just said on the radio that he has lost drive. Quite lucky to stop there, rather than having to walk back in the rain.

Lap 41 The best battle in the field right now has to be the train of cars from Varga in the Sauber down to Shane Butler in the Mercedes. Each car neck and neck, fighting as hard as they can in treacherous conditions.

Lap 44 Hollis Graham looks to be challenging team mate Kingshark now, as we head into the final laps. Kingshark definitely isn’t looking as fast as he did earlier…

Lap 46 Bomeny has now joined the battle for second…But Graham has done it! Kingshark slides around turn 4, allowing Graham through into second, and now Bomeny is right on his tail too!

Lap 48 Another mistake by Kingshark! He spins into the final turn, allowing the Ferrari into the final podium position…aaaand, Widger flies through into 4th. That has to hurt after driving so well for most of the race.

Lap 51 Morley slows to a stop! Pulling over. That is such a shame, to retire in your home race…

Lap 52 Sunderland now joins the retirees as well. This has to be the most retirements we’ve had in a long while!

Lap 55 Only a few laps remaining, but Shane Butler is able to squeeze through on the inside of turn 2, putting the Mercedes up into 8th place!

Lap 58 And Ingram takes a fantastic race win for McLaren. Utter domination from William. Great result for Marussia as well, with an 11th place! 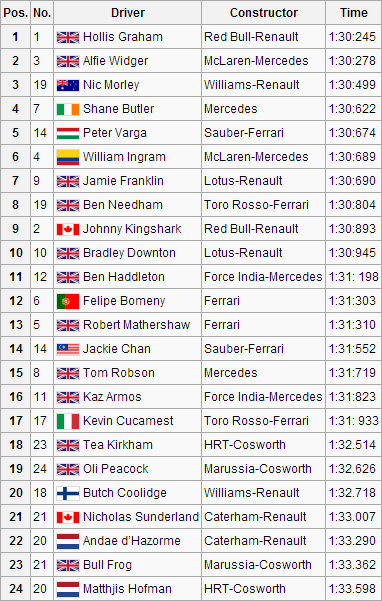 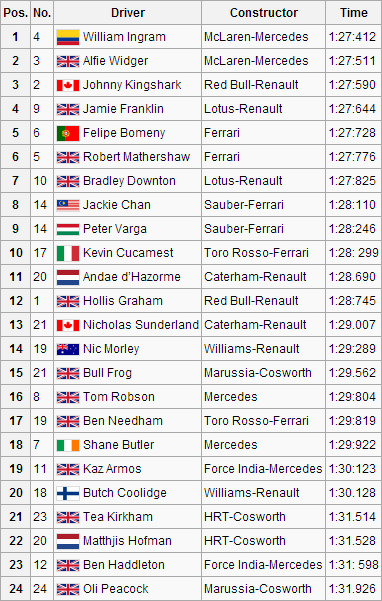 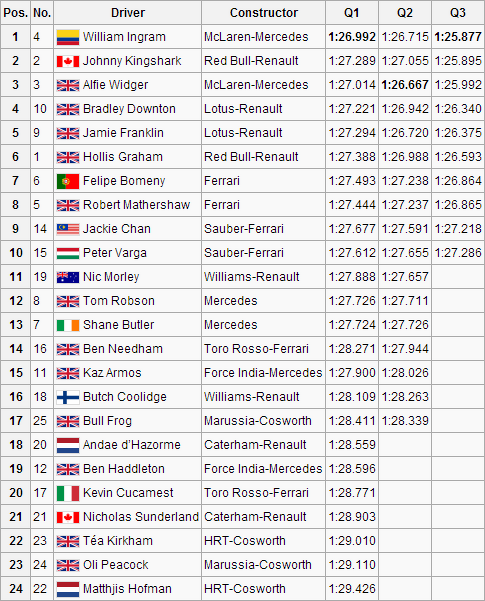 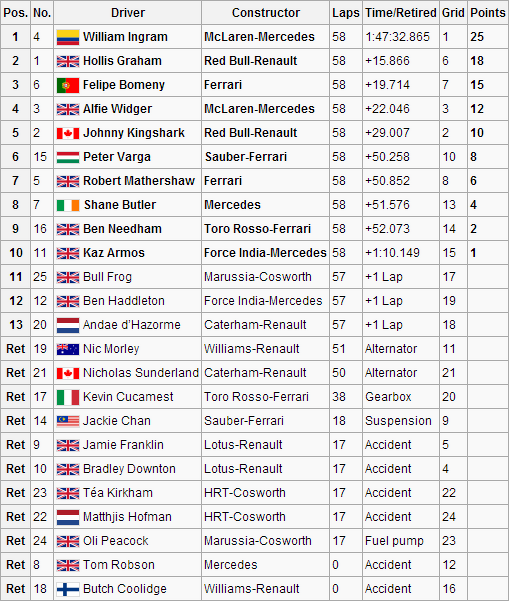