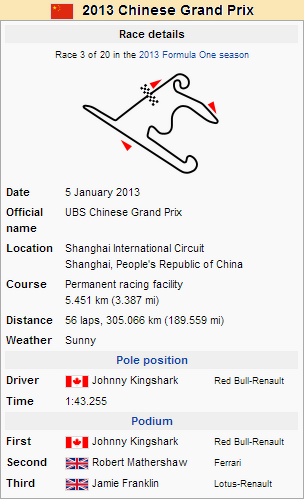 The Chinese Grand Prix was the third round of the Random Forum Championship Game Season 1.

For the second race in a row Williams' Butch Coolidge topped a wet first practice, but this time from the two Red Bull's and the two Mercedes'. Oli Peacock performed superbly to put his Marussia into 7th place. Championship leader Williams Ingram struggled to 11th but his teammate Alfie Widger struggled even more for the second time in a row, only managing 17th. He still managed to go quicker than Franklin's Lotus however, who suffered severe handling problems on his way to 18th. Morley struggled again for Williams, only able to go 21st fastest.

Williams Ingram topped a dry second practice session for McLaren from Lotuses Jamie Franklin. Robert Mathershaw was third for Ferrari ahead of the two Red Bull's, Downton's Lotus, and the second McLaren of Alfie Widger. Chan and Varga put Sauber 8th and 10th while the morning's fastest man, Coolidge, could only manage 13th. Bomeny struggled to 14th in the second Ferrari while Nicholas Sunderland performed well for Caterham to go 16th. Shane Butler suffered gearbox issues in his Mercedes and could only manage 20th.

Despite the wet weather, the Caterhams, Marussias and HRTs fall out in the first session, joined by Kaz Armos in the Force India.

Continued normality in Q2, with the order not changing much. Shane Butler once again narrowly misses out on Q3. One of these days, he might get lucky.

Red Bull’s Johnny Kingshark snatched pole from Lotuses Jaime Franklin by just over a tenth of a second, but it was Franklin who had looked well on for it. Having been quickest in Q1 & Q2, he set the benchmark as well in Q3, but couldn’t improve on his second run, whereas Kingshark remarkably found half a second, just snatching pole. Alfie Widger took third but Franklin’s teammate Downton struggled, with mistakes on both of his laps, he could only manage 9th. Coolidge didn’t set a time for Williams.

Lap 1 The race begins, and that’s the two Lotuses slow off the line for the third time! They need to sort that out. Franklin down to 4th, and Downton to 10th!

Lap 2 Graham has made a storming start, as he blasts down the inside of Franklin, who in turn had just passed Widger.

Lap 4 Peacock out once again. Dreadful luck considering he had somehow made his way up into 10th! Looks to be a fuel pick-up error.

Lap 7 Championship leader, Ingram, makes a mistake out of turn 14, and that’s him down a few places. His tyres aren’t looking great after that little spin.

Lap 14 Ingram and Coolidge have picked up the pace, as they both slip passed Robson out of the exit of the hairpin.

Lap 16 Ingram and Coolidge again. They are like a double act! Shooting up alongside and Bomeny as if he was standing still…

Lap 19 That’s Widger out of the race! Slowing down on the straight, watching as his team mate takes up his 5th place. That has to hurt.

Lap 22 Shane Butler with the DRS on Bradley Downton along the straight. That Mercedes is blasting passed. Such a speed difference.

Lap 26 Jackie Chan look set to get pass Downton as well…oh, but wait! He doesn’t slow down for the hairpin! Chan drives straight on, and that’s a huge impact with the barrier. Was it a brake failure?

Lap 29 Franklin is looking closer to Graham now more than ever. Well within the one second zone. He breezes passed, taking the inside line, and claiming the final podium position! Bomeny is looking very close to Graham as well…

Lap 30 Bomeny uses a double helping of KERS as he blasts up the inside of the Red Bull nto turn 1, securing 4th place!

Lap 33 Coolidge is now looking the faster of the two now, as he battles Ingram, taking 6th place.

Lap 34 It seems that McLaren have released a statement to say that the reason for Widger’s retirement was in fact a conspiracy problem. It seems he’s been making too many up.

Lap 38 Shane Butler on his team mate now, with Downton close behind…He goes for the position, pushing Robson aside a little too much! Tom takes to the escape road, allowing Bradley through as well. I don’t think the team will like that too much.

Lap 47 Coolidge takes Graham just before the hairpin…Graham tries to get on the power too early though and spins! Ingram has nowhere to go, and he’s out! The two Championship leaders come to blows. Graham has lost his front wing, but at least he’ll be able to limp back to the pits.

Lap 51 Downton is looking stronger in the last part of this race, taking Butler into turn 4. Great manoeuvre.

Lap 56 The other Lotus of Franklin was looking strong as well, but sadly ran out of laps as Kingshark takes his first win of the season ahead of Matershaw! 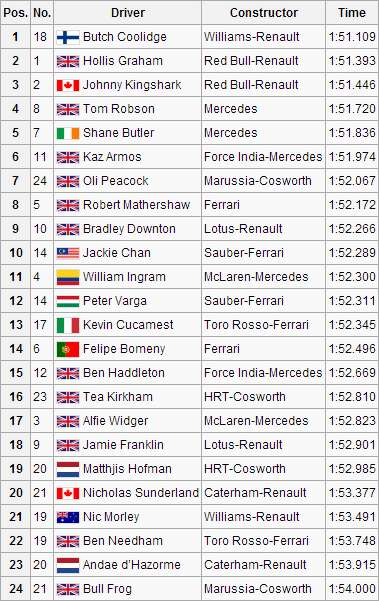 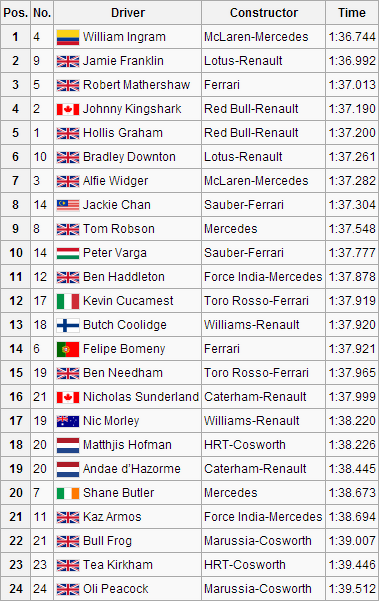 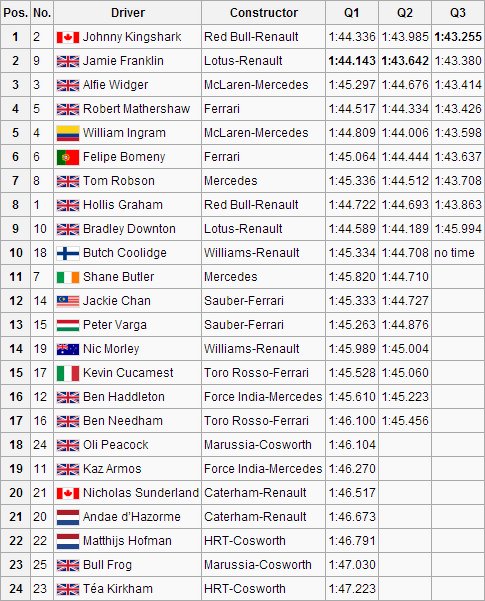 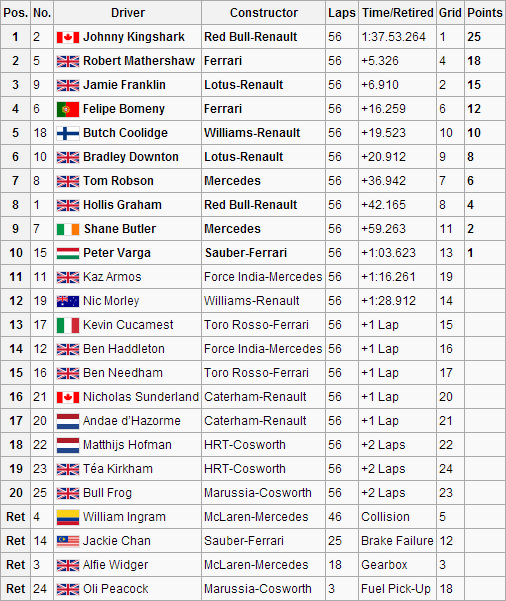