The Hungarian Grand Prix was the elevnth round of the Random Forum Championship Game Season 1.

As Formula One finally got underway in Hungary following the snow delay it was Alfie Widger of McLaren who took the top spot in the opening dry practice session. Franklin took second for Lotus with Chan in a fantastic third place for Sauber followed by the two Red Bull's. Sunderland pulled his Caterham into the top 10 while Downton and Ingram struggled to 13th & 14th respectively. Frog perofrmed well for Marussia, managing 16th while Shane Butler suffered mechanical problems early on in his Mercedes meaning he didn't get much running. 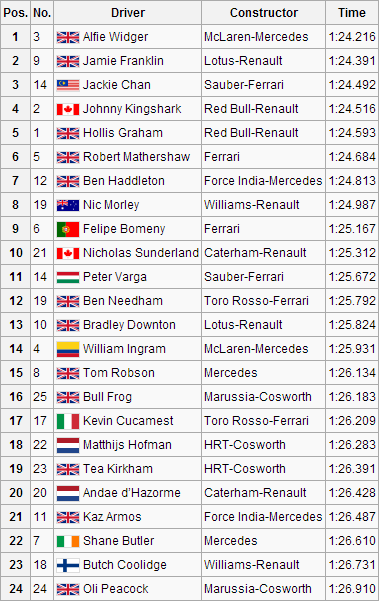