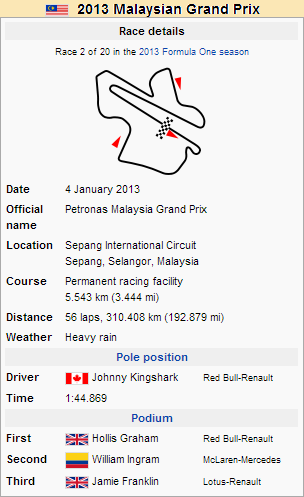 The Malaysian Grand Prix was the second round of the Random Forum Championship Game Season 1.

The race, contested over 56 very wet laps was eventually won by Hollis Graham, but not after much drama. There were two red flag periods, one for an accident involving Johnny Kingshark and Bradley Downton, and the other for the appalling weather, as well as the heartbreak of home favourite Jackie Chan crashing into the side of Williams' Butch Coolidge while fighting for the lead, eliminating both. Williams Ingram managed second, while Jamie Franklin acheived Lotuses first finish so far this season in third.

The first practice session was run under incredibly wet conditions in which wet weather specialist Butch Coolidge put Williams fastest. It wasn't all good news for Williams however as teammate Nic Morley was sidelined for most of the session with gearbox problems, not actually managing to complete a lap time. Tom Robson put his Mercedes second with Felipe Bomeny's Ferrari third. Championship leader William Ingram was 8th, Tea Kirkham shined for HRT in 11th but Johnny Kingshark could only manage 16th in the Red Bull.

Championship leader William Ingram took the fastest time in the second practice session, run in conditions completely different to the first. Just as first practice ended the rain stopped and the track dried sufficiently without further rainfall in time for FP2. The two Red Bull's and Lotuses followed up with Mathershaw's Ferrari 6th and home favourite Chan in 7th for Sauber. Bomeny could only manage 13th in the second Ferrari while the morning session's fastest men, Butch Coolidge and Tom Robson could only manage 15th and 17th respectively. Alfie Widger of McLaren struggled massively with handling problems during the session, only managing 20th place.

In a difficult session the usual contenders were the first to fall. Oli Peacock in particular was looking strong early on, until a mistake at the penultimate turn lost him over a second on his final run. Kevin Cucamest struggled to 21st for Toro Rosso while Johnny Kingshark took the fastest time for sister team Red Bull.

In a shocking turn of events, we see both Felipe Bomeny and Alfie Widger out in Q2. Bomeny looked confident in the early stages, but couldn’t quite improve enough to enable a top 10 result. Alfie seemed to struggle for the entirety of Q2, complaining of a lack of grip, caused by low temperatures in the tyres. Tom Robson narrowly misses out in Q3 once again, as the Force Indias improve upon their practice times to finish 13th and 14th.

Johnny Kingshark stormed to a fantastic pole position in a soaking wet Q3, snatching it by over a second from his teammate. Championship leader Ingram put his McLaren a strong third, ahead of Lotus teammate Franklin and Downton. Coolidge took a fantastic 6th on the grid for Williams.

Lap 1 Despite a perfect qualifying, both Red Bulls lose out to a very fast starting Coolidge, as the Williams takes the lead from sixth on the grid!

Lap 1 Both Ferraris get great starts as well, as the Lotuses falter once again.

Lap 2 Varga and Robson come together at the beginning of lap 2, and that is both of them out of the race! Terrible luck for Tom Robson in the Mercedes, two races in a row!

Lap 4 The HRT of Hofman comes into the pits with a puncture, after driving over the debris left by the Sauber. Looks to be suspension damage…he won’t be back out.

Lap 15 Despite a fantastic qualifying, and what was looking like a strong race, Johnny Kingshark looks to be out with a mechanical failure. He’s trailing around very slowly. The team are on the radio, telling him to see if he can get it back to the pits, but it looks like a big ask…

Lap 16 Kingshark is now at the back of the field, almost back to the pits, amongst the back markers…oh wait! That’s Downton, going into the last corner, he’s ploughed into the back of him. Both go trailing off into the gravel! Bradley Downton is out for the second race in a row with another horrific incident…

Lap 17 It’s a Red Flag as the medical crew attend to Downton, who looks to be in a lot of pain after that airborne collision.

Lap 18 The race is restarted but Ben Needham trails off slowly into the pits. It seems that he’s lost 5th and 6th gears.

Lap 23 Chan is looking very strong in his home race, could be set for a podium place, and still chasing Graham hard!

Lap 31 Chan pulls a move up into turn 1, and that’s him up to second. What a fantastic showing in his home race!

Lap 34 Chan is on fire. He’s now caught up to Coolidge, and they are going head to head for the win! Sauber vs Williams!

Lap 36 Jackie Chan shoots up the inside into turn 3…Oh! They collide, Chan launches as he hits the Williams’ front left, which is in turn torn from the car. Atrocious luck for both of the drivers. They were on for such a strong showing…

Lap 38 The top 3 are very close to each other now. We could be on for an exciting finish, as long as we don’t have any more comings together.

Lap 41 The rain is coming down very hard now. Oli Peacock slides off into turn 6, he simply ran out of grip and slides into the gravel. He’s going nowhere.

Lap 42 Red Flag! Apparently the rain is just too much at the moment. We are now up to the 75% point exactly…will they restart the race for the remaining 14 laps?…

Lap 43 The race restarts to the roar of the crowd! Matershaw is quick off the line and takes his team mate down into turn 1. Definitely no team orders there!

Lap 50 Graham, Ingram and Franklin now fighting tooth and nail for that top spot. It’s fantastic to see! Each car within a few tenths of the other!

Lap 53 Frog takes 12th place, with an awesome move into the penultimate corner, taking Kirkham first, before out-dragging the Caterham for 12th!

Lap 56 Graham takes a great win for Red Bull Racing, quickly followed by Ingram in the McLaren and Franklin for Lotus. That has to be the closest finish we’ve had for a very, very long time.

Lap 56 That’s Haddleton out of the final corner, just beating Morley to the line. That had to hurt for the Australian. Force India end up with 8th and 9th. 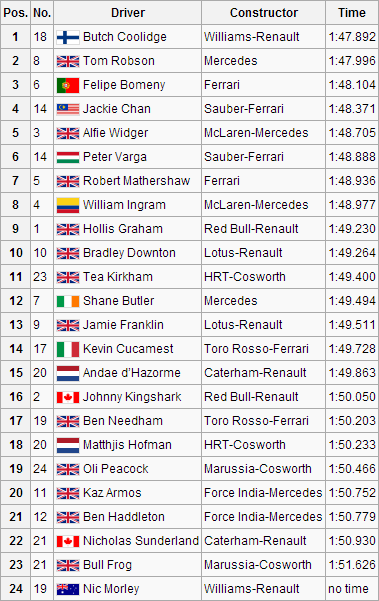 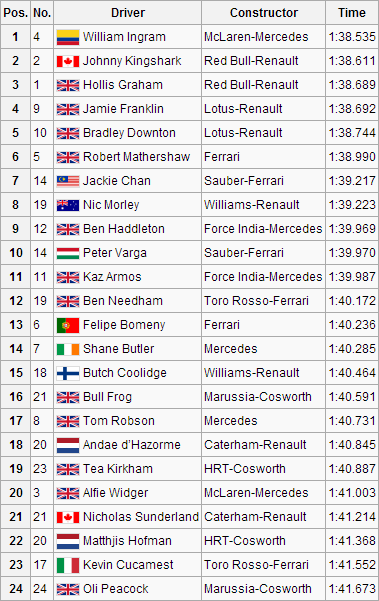 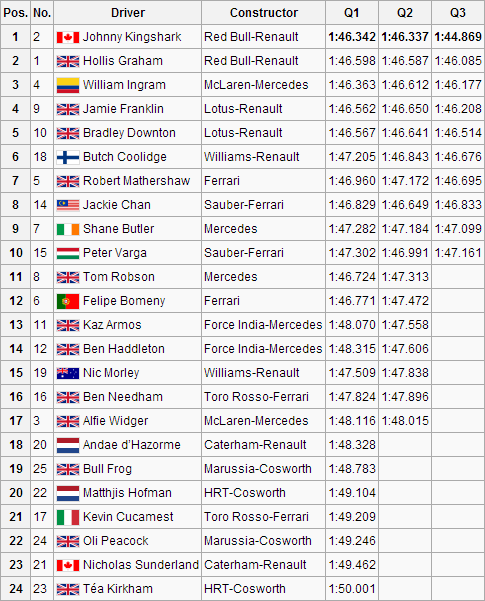 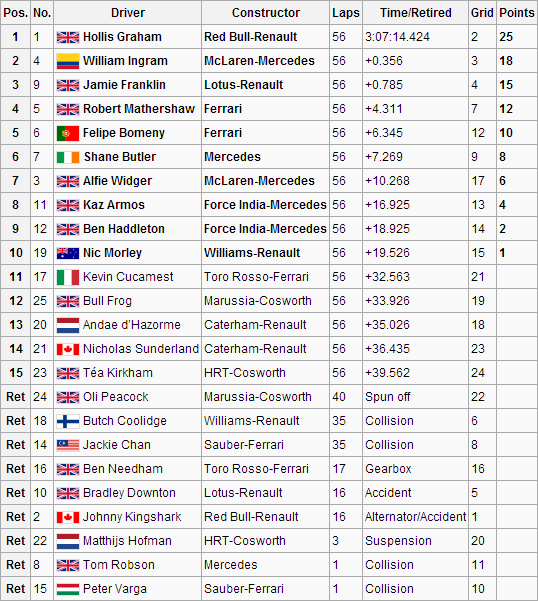