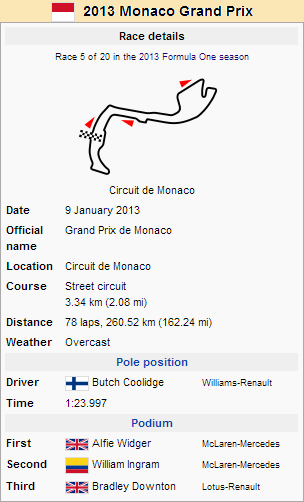 The Monaco Grand Prix was the fifth round of the Random Forum Championship Game Season 1.

Alfie Widger topped the first practice session for McLaren, just over two tenths clear of Hollis Graham's Red Bull. The Lotuses of Franklin and Downton were next up, continuing their strong form from Spain, with Mathershaw 5th for Ferrari and Morley a fantastic 6th for Williams. The second Ferrari of Bomeny was 7th, ahead of Butler, Ingram and Robson who rounded out the top 10. Sunderland was a brilliant 12th for Caterham showing the new upgrades are working well but teammate d'Hazorme struggled with steering issues. Marussia were strong in 15th and 16th, HRT managed 18th and 22nd but both Coolidge and Armos crashed early on, only managing early laps, putting them in the final two spots.

Rain arrived for FP2 and it was no surprise to anyone at all that Coolidge took top spot for Williams. The morning's fastest man continued their strong form with Graham 2nd again and Widger 3rd. Peacock stunned for Marussia in 9th place while Hofman put his HRT in 14th. Lotus struggled badly in 12th and 16th but not as badly as Ferrari's Robert Mathershaw, who could only manage 20th while teammate Bomeny was 4th. Caterham struggled in the rain after a good dry morning performance in 18th and 21st.

The rain hadn’t disappeared from yesterday’s second practice as Q1 started in Monaco. Ben Needham was the first casualty of the weather, crashing at Tabac before he’d set a lap, and bringing out the Red Flags. The usual six looked set to join him but Oli Peacock put in a fantastic late lap in the Marussia to go 13th, and put Ben Haddleton out in Q1.

Butler once again missed out on Q3 by the narrowest of margins, just behind Downton of Lotus, of whom was lucky to get into Q3. Mathershaw was the biggest surprise, however, only managing thirteenth place. For some reason, his Ferrari just didn’t look quite right navigating the narrow streets of Monte Carlo in the wet conditions. Peacock did a fantastic job to finish 15th in his Marussia, the highest qualifying position of the team thus far. Morley, unfortunately had quite a heavy crash into the Nouvelle chicane. Suffering from spray from the car in front, he couldn’t quite place his braking point correctly, clipping the back of Cucamest’s Toro Rosso, and sliding into the barrier. The Toro Rosso suffered a puncture from the incident and went on to crash in the next corner.

The rain intensified towards the end of Q2 and the start of Q3 was delayed as the FIA waited for the rain to die down. After half and hour it did so and the final part of Qualifying got underway. Kingshark took provisional pole but as more car went round the benchmark went down all the time. As the cars completed their final laps it was Graham who looked to have taken pole, but Sauber's Varga had other ideas, going purple in the first two sectors but just missing out by two tenths. Widger then stole pole position but as expected it was the last man over the line who actually took it, Butch Coolidge of Williams. 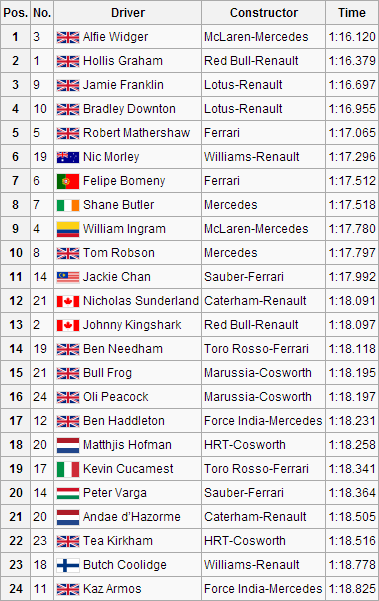 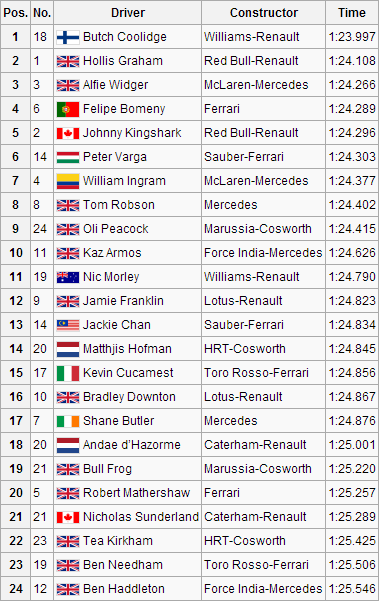 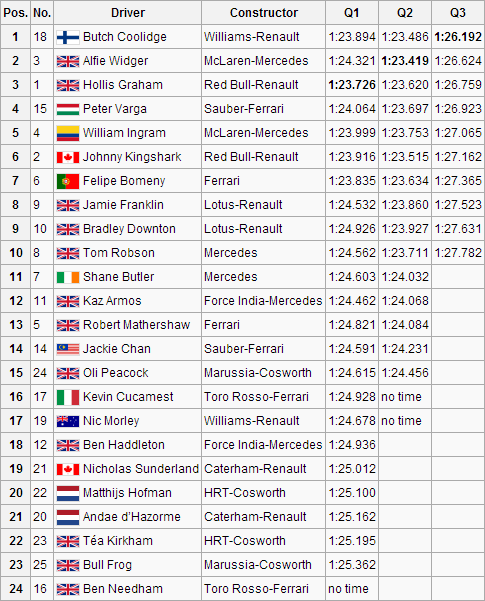