This is the first full season of the Random Forum Championship Game.

The following teams and drivers competed in the season. 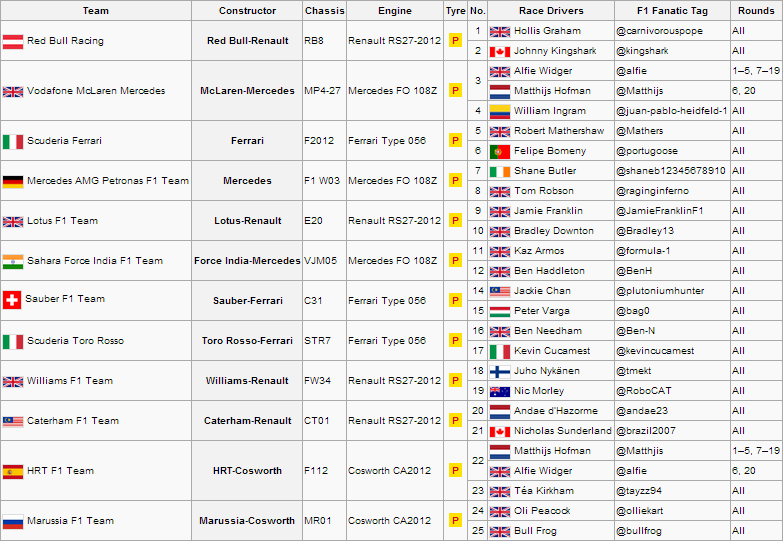 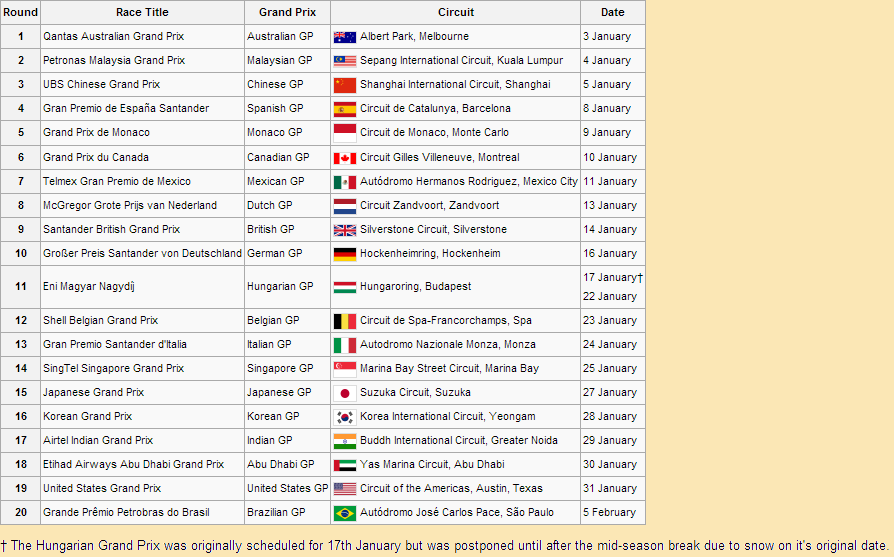 The season was preceded by two test sessions; one at Barcelona that was run in dry conditions, and the other at Jerez, which ended up being wet. While nothing much could be gained from these two tests, with neither being really long enough to establish any kind of pecking order, it was clear to see we were in for a close, exciting, and somewhat random season.

The season began in a very wet Australia. William Ingram got a fantastic start from pole position to lead away from his teammate Alfie Widger, who had managed to pass Johnny Kingshark's Red Bull. An early collision at turn 1 eliminated Tom Robson's Mercedes and a fast starting Butch Coolidge. The race only got crazier from there, as a mechanical problem for Oli Peacock's Marussia eliminated both HRT's and both Lotuses, as well as Jackie Chan's Sauber, the resultant debris bringing out the safety car. Widger now began to slide down the field while Felipe Bomeny went the other way as Kevin Cucamest joined the ever growing list of retirements. Nic Morley was running strong in eighth place for Williams until he was sidelined by a mechanical failure late on, while Kingshark made an error while running second, and dropped all the way to fifth, promoting Bomeny onto the podium behind Kingshark's teammate Hollis Graham, and winner Ingram.

The second round of the season ended up even wetter than the first as the race was caught in a Malaysian tropical storm. Johnny Kingshark took pole position but it was the wet weather specialist, Williams' Butch Coolidge who shot into the lead from sixth on the grid. Home favourite Jackie Chan moved into fourth for Sauber as both Lotuses slipped back. Peter Varga's Sauber and Tom Robson's Mercedes came together at the beginning of lap 2, eliminating both cars on the spot.On lap 16, polesitter Johnny Kingshark slowed from second place and on his way back to pits, caught out Lotuses Bradley Downton, who ploughed over the back of him landing upside down in the gravel. The race was red flagged as the medical crew extracted Downton and rushed him to the medical centre but the race was restarted when it was confirmed he was ok. Home favourite Chan was up third with this and moved into second on lap 30, when he set about chasing Coolidge. Unfortunately he misjudged his braking and the two collided, putting both out, and handing Hollis Graham the lead and the win, but not before the race was red flagged once more for 30 minutes due to the intensity of the rain. William Ingram finished second while Jamie Franklin got Lotuses first finish in third.

Johnny Kingshark once again took pole position for China but this time the race went much more to plan as he led from start to finish, claiming his first win of the season. The race start proved a shocker for Lotus as Franklin slipped from 2nd to 4th and Downton fell from 9th to 10th. Graham pulled himself up into third while Oli Peacock suffered his third retirement in a row, but this time it put him out of a fasntastic 10th place. Chan suffered brake failure in his Sauber while fighting Downton for 10th and Widger retired when his car slowed on the straight, allowing teammate Ingram through into fifth. Franklin and Bomeny passed Hollis Graham towards the end of the race as he looked to be struggling but worse was still to come. Having been passed by Coolidge at the hairpin he spun getting on the power to early and collected Championship Rival Ingram, eliminating the latter and forcing himself into the pits. Downton past both Mercedes to move up to 6th while Graham's pitstop dropped him to 8th. Mathershaw collected second for Ferrari while Franklin picked up another podium in third.

Spain was the first fully dry weekend and Lotus looked to be on top form, with Franklin topping both practice sessions, as well as Q1 and Q2, and it would have been stupid to bet against for pole. But it never came. He was robbed of a certain pole by Hollis Graham and also lost a front row start thanks to teammate Downton, who also managed a quicker time, however not by much, just 0.004 seconds seperated the top three. Downton took the lead from Graham at the start as Lotus finally looked to have resolved their start issues, Franklin kept third as well. Frog retired after a slide into the gravel ended a miserable weekend. Franklin soon made short work of Graham, giving Lotus a 1-2 and soon dispatched his teammate as well to take the lead. Widger suffered his second reitrement in 2 races as a gearbox problem put him out of 4th. Franklin won form Downton giving Lotus a 1-2, Red Bull collected a 3-4 behind them with Graham on the podium. Ben Haddleton had to retire his Force India from 10th late on in the race with a loss of power.

Round five took us to the principality, the streets of Monte Carlo! Butch Coolidge stormed to pole for Williams in a wet qualifying session but made a mistake on the opening lap at the Nouvelle Chicane, demoting him to fourth. Widger took the lead from their and never looked back. Graham moved into second with Ingram third and amazingly no-one retired on the opening lap. Ingram passed Graham in the first round of pitstops while Varga repassed Kingshark for fifth. This was short lived however as the two came together in a racing incident later in the race, putting them both out. This made it two Saubers out of the race after Chan suffered suspension failure at the Swimming Pool. Late on in the race Downton squeezed past his teammate Jamie Franklin to take the final podium spot behind the two McLaren's but this was only after Red Bull's Johnny Kingshark pulled into the pits with and electrical fault late on. There was also disaster for Oli Peacock who retired his Marussia from 13th place after a puncture put him in the wall at Mirrabeau. 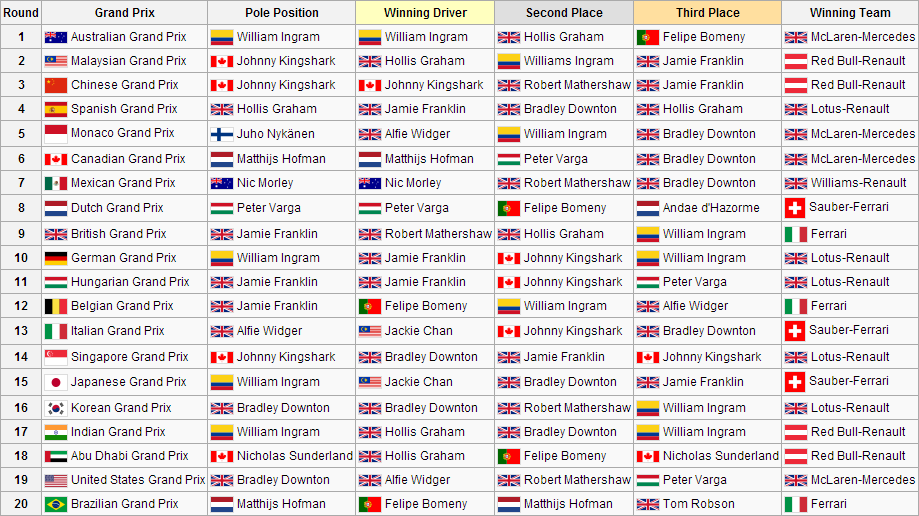 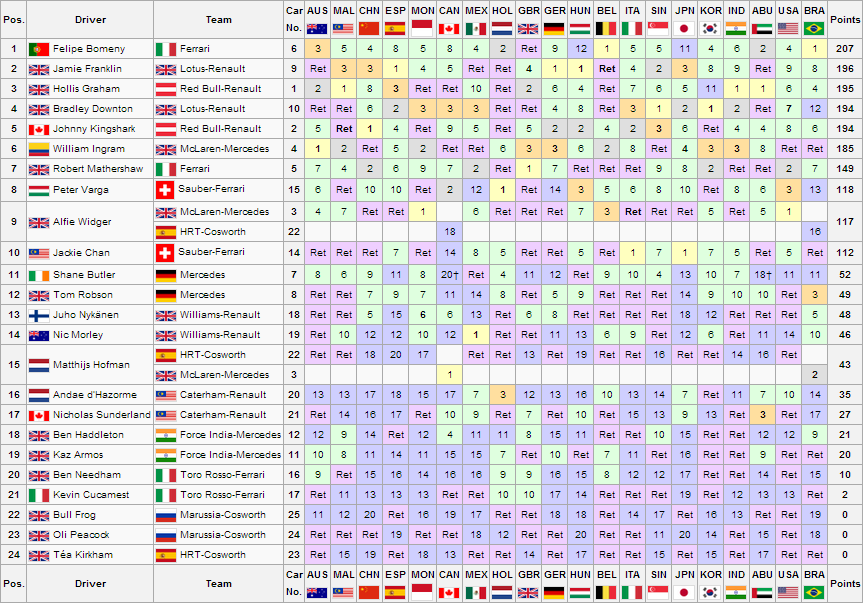 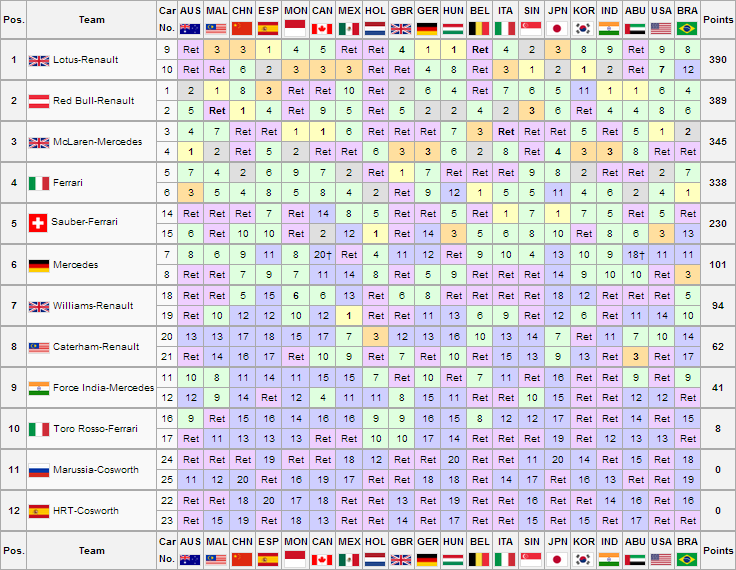